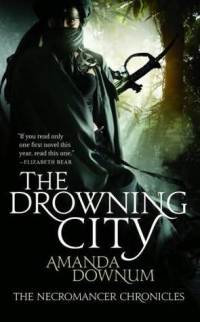 The Drowning City by Amanda Downum

The Drowning City by Amanda Downing is an ambitious book with a penchant for compelling prose and a gray characters, centered in a beautifully rendered city with a Southeast Asian flavor. While it did not fully realize its potential, I must give credit to the author for aiming high and nearly reaching her lofty goals.

Symir. The Drowning City. A trading metropolis filled with pirates, revolutionaries, and spies, constantly in fear of being washed away by the mighty Mir River or destroyed by the lurking volcano nearby. Only magically wards holding back certain annihilation. The dearly bought peace allowing revolutionary fever to seethe to the surface, threatening to blow the city apart!

When Isyllt Iskaldur and her two bodyguards, Adam and Xinai, sail into the grand harbor they know that the city is a ticking time bomb. In fact, that is why they have come, for the Assari Empire’s covetous eyes have been wandering toward her northern neighbors, and only internal problems will stop the Empire’s inevitable invasion. And Isyllt, master necromancer and spy, intends to fan the flames of unrest until just such an event rips Symir apart.

Once settled, Isyllt’s local contact with the rebels quickly becomes an idealistic youth named Zhirin. This young woman having been caught up in the revolutionary spirits of the city by her relationship with a young man. And though Zhirin’s family has grown prosperous by cooperating with the Empire, she is willing to risk it all to aid Isyllt in providing aid to the rebels, unaware that her benefactor’s motives might not be completely altruistic.

Meanwhile, Isyllt’s guard Xinai finds that returning home to Symir has affected her more than she ever imagined. Her path taking her away from her companions and back to the people who aided her escape to the north after her village was massacred by the Imperials and their local collaborators so long ago. The unexpected ghosts of the past quickly catching Xinai up in the spirit of revolution and leading ehr down a road she never expected to take.

From this combustible mixture, circumstances quickly spiral out of control. More than one revolutionary group fighting against imperial occupation. Their methods very different: one willing to kill enemy and innocent alike, while the other seeks a less destructive path to freedom. Isyllt forced to fight against her own conscious, as her actions escalate events, pushing the unaware citizens toward a struggle that will cause untold destruction and death. Her use of the unsuspecting Zhirin causing more than a little guilt. Events leading to a near inevitable end.

Without a doubt, Amanda Downum does an excellent job in The Drowning City of creating the living, breathing city of Symir. It is vividly described, amazingly realistic, and hopelessly wracked with division and revolutionary violence. The clashing views of the citizens – whether Imperial, rebel, collaborator, or neutral individual – wonderfully explored, especially the emotional struggles of characters after suicide bombings kill innocents. The senseless deaths the catalyst for much soul searching and more than a little self-justification, as characters reconcile their own guilt with their desires to free their city or protect their country from invasion. I can’t say I always agreed with their decisions, but they were powerful and gripping.

Another triumph here is Isyllt and her necrotic talents. This smooth-as-silk spy one cool customer, calculated yet emotional, deadly yet compassionate. Her talent for necromancy deftly done by Downum with enough explanation to give her ghostly magic a feel of reality yet not so much as to strip it of its tantalizing mystery. With so much still unrevealed about her, I can’t wait to read more about her.

But this was not a perfect book. Far from it. From tedious beginning to uninspiring romantic plots to unrealistic outcomes, there were more than a few elements which caused this narrative to underperform. And toward the end, even the mesmerizing local itself served more as a distraction than a compliment to the narrative, draining whatever momentum the story had achieved. As I said earlier, Amanda Downum aimed high with this novel, but she just wasn’t quite able to pull everything together to reach the full potential of this story.

Filled with mystery and magic, set in a wonderfully envisioned world, The Drowning City was an entertaining look at terrorism in a fantasy setting, and its lead character, Isyllt, has all the traits of developing into a memorable character. No, the novel did not completely satisfy me, but I will still be searching for the next book in the series, interested to see how Amanda Downum continues to develop this intriguing world.

4 Responses to THE DROWNING CITY