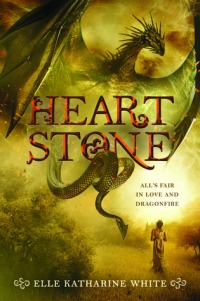 I want to admit up front that I have never, ever read any Jane Austen. How I was able to navigate through four years at a liberal arts university without ever reading this author still amazes me, but I did, without any grand plan by myself to do so. All of which means that when I picked up Heartstone by Elle Katharine White I was experiencing this fantasy retelling of Pride and Prejudice without any real knowledge of the original, which I actually believe helped make the experience more exciting.

The story here revolves around Aliza Bentaine of Merrybourne Manor; this second of five sisters attempting to survive the horrible monster invasion which has turned their home into an isolated fortress in a sea of gryphons. But, thankfully, a band of Riders has come to Merrybourne to drive off the creatures.

Among this band are two very eligible bachelors, Master Brysney and Master Daired. Both of whom Aliza’s mother hopes to pair up with her eligible daughters. But, of course, Daired has made a horrible first impression on Aliza, which keep her from warming to him, so much so that she is only his unease ally in the fight to drive off the monsters from the area.

Quickly, the immediate threat of the rampaging gryphons begins to fade in importance, as a much bigger threat looms ever larger. A deadly foe emerging, one who threatens to bind all the monsters to its cause and set them loose on an unprepared land.

Probably the element I appreciated most about this story was something that did not happen.  Having only heard things about Jane Austen’s Pride and Prejudice, one of my worst fears when opening this book was that this fantasy retelling would not be modern enough for my sensibilities. I mean, Victorian steampunk is all well and good in my mind, but I just could not see myself enjoying a narrative where the female characters had to wear dresses while riding dragons or act in the manner of women from the P & P era. So, it was with great thanks I found the author had jettisoned most of these societal trappings in favor of a more modern society.

The other enjoyable part of Heartstone was the fantasy elements seamlessly incorporated into this age old tale. Fantastical creatures were woven into all layers of society, not relegated to mere monsters. Dragons were nicely done with their own particular lore. And, the world itself was well endowed with its own history, religion, and cultures.

The only negative I have with the tale is the focus on relationships, specifically the growing romantic relationships between the parties.  Yes, I realize this was a retelling of Pride and Prejudice.  And, yeah, I realize what the main plot of that story is about.  But, for whatever reason, I assumed a fantasy retelling meant the author would not be following the original plot line in such a dedicated way.  Truly, it bothered me that the #1 goal of these female characters seemed to be getting married.

In sum, Heartstone is a fine retelling of Pride and Prejudice. Other reviewers have commented that this narrative is (up until the end) a near perfect match for Jane Austen’s story, and I will accept that they are not misleading us by that description, but even with that being said, the author has added her own ideas to Austen’s tale and ends it with a fast-paced, exciting conclusion which is all her own. So, whether you like Pride and Prejudice or not, Heartstone is a fantasy you very well might enjoy.