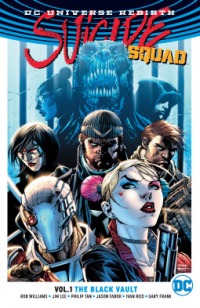 Well, DC is rebirthing all their titles . . .  again.  Suicide Squad being one of the many books starting all over.  And while I didn’t know what to expect from it, had to get a grip on all the new stuff going on, overall, I thought it was a good beginning with lots of promise.

The new origin story begins the fun.  Director Amanda Waller as the head of A.R.G.U.S. recruits a team of villains called — Task Force X, or Suicide Squad.  (Not that there is much of a team here, because Waller runs the show, and if anyone does anything she doesn’t like or tries to escape or anything else, then they will die.)  She also convinces Captain Randall Flagg, long-time Navy Seal, to become the team leader.

Once together, the group heads out to the Black Vault to steal a cosmic item.  The adventure filled with action, surprises, and loads of “villains” to put down. And when that is done, we get extended backstories (personnel files and interviews) about Deadshot, Katana, and Boomerang, as well as a stand-alone adventure with Flagg and Harley Quinn. 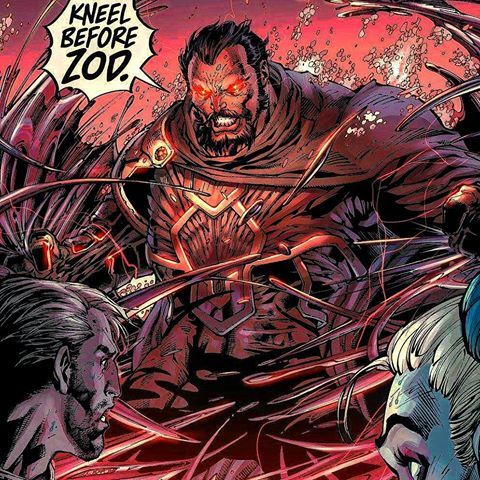 So the good stuff.  I loved all the characters.  Especially good was the back stories of the guys spotlighted.  And the art was really, really good.  Really liked all the variant covers and pencil artwork.

Bad.  The main story was too short for me.  I also didn’t find it too interesting.  Sure, it had loads of fights and stuff, but it seemed pretty pointless.  At least, I didn’t get it.

All in all this was a good graphic novel.  The story was decent.  The characters were really interesting with cool back stories.  Much better than the New 52 versions for me, at least.  The artwork was pretty amazing.  The characters looked good and everything looked real, jumping off the pages real.  So, if you want to give DC Rebirth a try, this looks like a really promising team book to jump on board with.

Well, I hope you liked this review, and if you are on Goodreads, friend me any time to talk about my reviews or comic books.

Connor is a teen who enjoys graphic novels (DC Comics are preferred), superhero movies (Captain America is his favorite), watching episodes of The Flash, Arrow, and The Walking Dead as well as the NFL, NCAA football, and the NBA on t.v., will happily accept any and all caps (because you just can’t have too many caps), and whose favorite music right now revolves around old rock favorites of the past.  And, no, Connor did not have any input into my paragraph about him.  Being a dad does have it’s privileges.