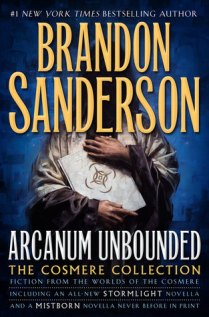 An all-new Stormlight Archive novella will be the crown jewel of Arcanum Unbounded: The Cosmere Collection, the first book of short fiction by #1 New York Times bestselling author Brandon Sanderson.

The collection will include eight works in all. The first seven are:
“The Hope of Elantris” (Elantris)
“The Eleventh Metal” (Mistborn)
“The Emperor’s Soul” (Elantris)
“Allomancer Jak and the Pits of Eltania, Epsiodes 28 through 30” (Mistborn)
“Shadows for Silence in the Forests of Hell” (Threnody)
“Sixth of Dusk” (First of the Sun)
“Mistborn: Secret History” (Mistborn)

Originally published on Tor.com and other websites, or published by the author, these wonderful tales convey the expanse of the Shardworlds and tell exciting tales of adventure Sanderson fans have come to expect, including the Hugo Award-winning novella, “The Emperor’s Soul.”

Arcanum Unbounded will also contain a currently untitled Stormlight Archive novella which will appear in this book for the first time anywhere.

BRANDON SANDERSON was born in 1975 in Lincoln, Nebraska. As a child Brandon enjoyed reading, but he lost interest in the types of titles often suggested to him, and by junior high he never cracked a book if he could help it. This changed when an eighth grade teacher gave him Dragonsbane by Barbara Hambly.

Brandon was working on his thirteenth novel when Moshe Feder at Tor Books bought the sixth he had written. Tor has published Elantris, the Mistborn trilogy and its followup The Alloy of Law, Warbreaker, and The Way of Kings and Words of Radiance, the first two in the planned ten-volume series The Stormlight Archive. He was chosen to complete Robert Jordan’s Wheel of Time series; 2009’s The Gathering Storm and 2010’s Towers of Midnight were followed by the final book in the series, A Memory of Light, in January 2013. Four books in his middle-grade Alcatraz vs. the Evil Librarians series have been released in new editions by Starscape, and his novella Infinity Blade Awakening was an ebook bestseller for Epic Games accompanying their acclaimed Infinity Blade iOS video game series. Two more novellas, Legion and The Emperor’s Soul, were released by Subterranean Press and Tachyon Publications in 2012, and 2013 brought two young adult novels, The Rithmatist from Tor and Steelheart from Delacorte.

The only author to make the short list for the David Gemmell Legend Award six times in four years, Brandon won that award in 2011 for The Way of Kings. The Emperor’s Soul won the 2013 Hugo Award for Best Novella. He has appeared on the New York Times Best-Seller List multiple times, with five novels hitting the #1 spot.

With thanks to the great people over at Tor Books, this giveaway is for a chance to win Brandon Sanderson’s latest, Arcanum Unbounded: The Cosmere Collection. This giveaway is open to residents of the US and Canada. Two lucky winners will receive a copy of the novel. To enter, check out the  Rafflecopter giveaway.  The winner will be randomly selected, then be notified by email of your great victory!

UPDATE: Our giveaway has ended, and Trevor Sherman and Jordan Rose are our winners.  Congratulations, guys!  The books will be in the mail soon.