Flashback Friday is something I do here at Bookwraiths every once in a while; a time when I can post my thoughts about books that I’ve read in the past but never gotten around to reviewing. With the hectic schedule of day-to-day life and trying to review new releases, there never seems enough time to give these old favorites the spotlight that they deserve. But with a day all to themselves, there is no reason I can’t revisit them, so let’s take a look at a fun fantasy series, which would make a great summer read. 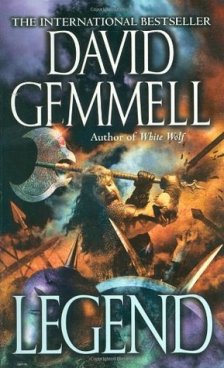 David Gemmell might not have invented action adventure fantasy, but he refined it, polished it up, and presented his updated version (Against the Horde/Legend) in 1984 to a reading audience who loved every minute of it.  Luckily, I was one of those readers back in the 1980s; this book instantly becoming one of my favorite fantasy stories for years to come.  But when I re-read it a few weeks ago, I have to admit being concerned it would not live up to my memories; my fear that all the years since its release having muted the pulse-pounding, adrenaline rush and relegated another classic fantasy into a fallen favorite.  But, thankfully, my fears were unfounded: Legend still as good as ever.

Here the Nadir hordes (Think Mongols) have been united under the charismatic, intelligent, and ruthless Ulric, who determines it is time for his people to conquer their more settled neighbors, the Drenai.  Standing in the way of this unstoppable barbarian force is the undermanned mountain fortress of Dros Delnoch, which should be impenetrable IF defended by an adequate force.  And that is exactly what the Drenai are lacking, as the fortress is undermanned, unprepared, and without adequate commanders to inspire the troops to hold until a relief force can arrive.

Enter Druss the Legend; he who is also known as the Captain of the Ax, the Axman, Deathwalker, and the Silver Slayer.  This fearsome warrior might be past his prime, but he is determined to answer his kingdom’s desperate call, to hold Dros Delnoch until the Nadir are turned back or every warrior lies dead beneath their swords.  This hero determined to finally find a death worthy of his legend!

Joining Druss upon the battlements of Dros Delnoch are a diverse cast of characters.  Rek the Baresarker and his beloved Virae come there to fight.  Serbitar and the mythical order he is part of arrive to aid in the last stand of the Drenai people.  Ordinary men stand side-by-side with rich commanders and wanted outlaws.  All these diverse individuals inspired by Druss himself to stand up for what they believe in, sacrifice themselves in order to keep what they cherish safe from harm, and lay down their lives die before they betray that which they hold dear.

Whenever I describe this book to a friend who is thinking of reading it, I say Legend is the fantasy equivalent of the Alamo, where men sacrificed their lives for a cause.  And in David Gemmell’s tale of sacrifice, each of the warriors portrayed — from Druss down to the lowest soldier upon the walls — knows their mission is a suicidal one.  Their forces no match for the Nadir horde.  Reinforcements not able to reach them in time.  Death the only real outcome of their bravery.  But even knowing this, these brave men and women refuse to lay down their arms and surrender to the inevitable.  They come together, find peace within themselves, lock strong arms with one another, and stand as a human walls between the world they love and those who would seek to destroy it.

Damn, I get teary just typing all that.  Honestly, I do.  No matter his limitation as a writer (because I know some readers find his writing simplistic in many ways), Gemmell uses his stereotypical cast of characters to maximum effect, their words and deeds inspirational, moving, and  sorrowful.  Vile people finding redemption.  Cowards exhibiting courage.  Lawless individuals displaying extreme honor. Each heroic death cutting like a stab wound to the heart.  The final stand of Druss as emotional charged and awe inspiring as any in literature.

Legend might not have been groundbreaking or innovative when it was published, much less now.  It doesn’t try to subvert tropes.  It doesn’t attempt to present an ultra-realistic story.  It doesn’t overwhelm with its exquisite prose.  What is does is tell an action-packed fantasy tale of a desperate last stand of a civilization by individuals caught up in events.  The tale of these people’s plight awe-inspiring and emotionally charged.  In other words, Legend is a masterpiece of heroic fantasy, one which rightly deserves its fame even today.