Teaser Tuesday is a meme held over at Books and a Beat.

To participate, all you have to do is:

• Open to a random page

• BE CAREFUL NOT TO INCLUDE SPOILERS! (make sure that what you share doesn’t give too much away! You don’t want to ruin the book for others!)

• Share the title & author, too, so that other Teaser Tuesday participants can add the book to their TBR Lists if they like your teasers! 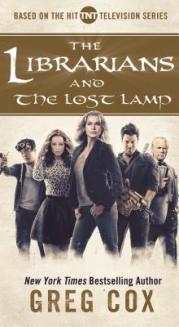 The Librarians and the Lost Lamp by Greg Cox

For those who want to know more about this book after reading that one line, here you go.

For millennia, the Librarians have secretly protected the world by keeping watch over dangerous magical relics. Cataloging and safeguarding everything from Excalibur to Pandora’s Box, they stand between humanity and those who would use the relics for evil.

Ten years ago, only Flynn Carsen, the last of the Librarians, stood against an ancient criminal organization known as The Forty. They stole the oldest known copy of The Arabian Nights by Scheherazade, and Flynn fears they intend to steal Aladdin’s fabled lamp. He races to find it first before they can unleash the trapped, malevolent djinn upon the world.

Today, Flynn is no longer alone. A new team of inexperienced Librarians, led by Eve Baird, their tough-as-nails Guardian, investigates an uncanny mystery in Las Vegas. A mystery tied closely to Flynn’s original quest to find the lost lamp. . . and the fate of the world hangs in the balance.