Posted on October 9, 2016 by Bookwraiths 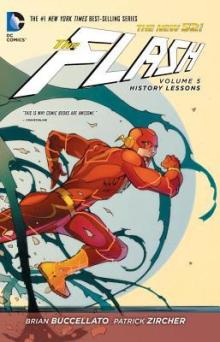 The Flash is my favorite DC character.  I watch The Flash television show; I read all the comics; and I can’t wait to see him in the Justice League movie.  Not that those things make me an expert on him, but I do know when a story about Flash is good and when it isn’t.  Well, this comic story was pretty cool, so let me tell you why

The beginning of this one was a little bit lame I have to warn you.  Green Lantern is in it, and the team up story didn’t make a lot of sense to me.  Plus is there anyone who hasn’t worn a GL power ring by now?

Once the GL junk finished up though, things started getting better.  A burial ground of a serial killer getting unearthed, letting this rampaging spirit lose to start killing people.  Flash gets involved, but finds he needs some serious help from someone who is undead!  Guess who that is?

Well, it is an oversimplification, I guess.  But you don’t want me to give too much of the story away, right?  And I did give you a hint about the undead guy.

What is really cool here was the art work during the second part of the story and the fact the author, Brian Buccellato got Flash moving in a fun direction again (except for the GL stuff).  It might just be me, but I think Barry Allen has it too hard.  Nothing ever goes his way.  So I was glad there was a little hope for Barry in here.

Well, I hope you liked this review, and if you are on Goodreads, friend me any time to talk about my reviews or comic books.

Connor is a preteen who enjoys graphic novels (DC Comics are preferred), superhero movies (Captain America is his favorite), watching episodes of The Flash, Arrow, and Supergirl  as well as the NFL, NCAA football, and the NBA on t.v., will happily accept any and all caps (because you just can’t have too many caps), and whose favorite music revolves around pop favorites of the moment such as Cake by the Ocean (Clean version because dad is still alive) as well as anything by Fall Out Boy — except for the new Ghostbusters (I’m Not Afraid) song which Connor denies they were ever involved with.  And, no, Connor did not have any input into my paragraph about him.  Being a dad does have it’s privileges.  🙂