Posted on October 6, 2016 by Bookwraiths 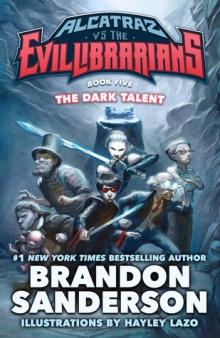 The Dark Talent by Brandon Sanderson

Other reviewers have already voiced it, and I am going to chime in with them: Wow, that got really dark, really quick.  By that, I mean, the conclusion of The Dark Talent, the latest volume in the Alcatraz series.  What had been a rather silly, fun-filled romp up until this point turned suddenly into a fairly depressing story.  I know that sounds improbable, but it is true.

I suppose frequent readers should not have been surprised by this turn of events though: Alcatraz Smedry has been preparing everyone for just such an occurrence since the very beginning.  His constant ominous warnings of future failure hard to overlook in the preceding four books.  Even the foreword to The Dark Talent reiterates this message again with the rather straightforward statement that “This is where the story stops being funny.  You’ve been warned.”  But somehow I wasn’t prepared for what actually happened, since things seemed to be following along the familiar Alcatraz pattern.

Picking up where The Shattered Lens ended, Alcatraz and friends have succeeded in driving off the Evil Librarian army from the Kingdom of Mokia.  But like always, things are even worse now that they were before.  Mokia is a ruin with many of her citizens still in a coma from Librarians weapons.  Alcatraz’s friend Bastille is one of these fallen heroes, who is stuck in limbo between life and death.  And, on top of that, Alcatraz has seemingly broken the Smedry talents!

Sounds pretty horrible, right?  Hold on, it is about to get worse.

With all these problems to be fixed, Alcatraz does what he does best: head off into danger with no real plan.  Here he decides he must somehow infiltrate the Librarians’ “Highbrary” (which is actually the Library of Congress in Washington D.C.) and try to stop his dad from potentially destroying the world.  (Attica Smedry having concocted a scheme to defeat the Evil Librarians once and for all by giving all Hushlanders their very own Smedry talent!)  And to top things off, Alcatraz has to rely on his Librarian mother, who abandoned him to foster care, for this desperate attempt to actually work.

No possible way it can get any worse than this, I hear you saying.  Wrong again!

I won’t go into details, because to do so would reveal spoilers and ruin the conclusion of this book, but things do indeed get worse for Alcatraz and his friends.  Much worse.  The conclusion to The Dark Talent about the most depressing ending I’ve encountered in quite a while.  Honestly, Brandon Sanderson ripped my heart out in just a few pages.  And only the note at the end of book kept all my hopes from shriveling up and blowing away.

Does all that mean this book was devoid of the slapstick humor, delightful puns, and clever wordplay which the Alcatraz series has become known for?  Nope.  All that is still present.  Every witty remark, quirky tangent, or snarky side note (and even footnotes in this one) reminding a reader of the middle grades comedy which they have become accustomed to.  One has to look no further than the chapter names (which range from Chapter Doug to Chapter Marco, because chapters “never get to be themselves, you know?“) or the Smedry’s airship (a penguin shaped craft appropriately dubbed the Penguinator) to see that Sanderson doesn’t jettison all the laughs in this more serious fifth volume.

Sanderson also increases the action to near non-stop thrills here.  Our hero and his band of friends and relatives sprinting from one amazing fight to another, from aerial duels to personal derring-do.  Each gulp of pulse-pounding excitement topping the next.

There are even more twists and turns than ever before.  The schemes, motives, and personal passions of allies and enemies alike revealed for readers to enjoy.  Alcatraz and his parents strange relationships highlighted.  Many of the “reveals” from these plot lines quite startling.  This element of the narrative picking up speed as the conclusion rapidly approached until it finally explodes into a flaming fireball of “What the Hades just happened?”

Which brings up that dang ending again.  The one I already mentioned was pretty dark.  If you haven’t already picked it up, I didn’t love it very much.  Not for this book.  Not for this series.  It felt . . . out of place.  Too dark, too depressing.  Sure, Alcatraz had warned everyone the end was going to be gloomy, but this was a bit over-the-top for such a comedic story.  In fact, if not for the note at the end, the conclusion would have ruined my whole perspective about The Dark Talent and Alcatraz’s journey all together.  So, thank God for the final note!

With that final note in mind though, I have to say The Dark Talent was an enjoyable read.  Sanderson is a master storyteller, so he effortlessly turns this adventure into a real page turner.  Perhaps it wasn’t quite as funny as previous books, but it was still an intriguing turn in our heroes tale, one which demands another volume in the series.

5 Responses to THE DARK TALENT