Today, I’m happy to have my son, Connor, return to the blog for yet another of his graphic novel reviews.  Thankfully, he was able to tear himself away from his busy schedule (Middle school is a horrible time drain.) to give his thoughts on a graphic novel he has been saving his money to buy for a while now. 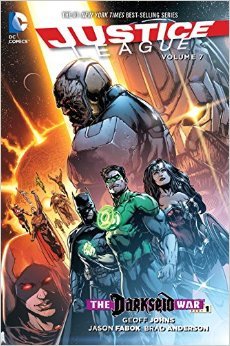 I bought this book expecting it to be great.  I love the series, and I just knew this was going to be a thriller.  And it was, giving you everything that a comic story should. It is so good, my advice is for everyone who loves great comics to read this one NOW!

The Justice League are on a world in trouble when Darkseid returns to earth to destroy them. Before Darkseid can do that though the Anti-Monitor a.k.a Destroyer of Universes shows up to get some payback on Dark himself.  So now the League (which had trouble defeating just Darkseid) needs some serious help to deal with both these guys at once.

As usual, what I loved about this book was the story.  Geoff Johns really does a great job making this fun from first to last page.  Action everywhere.  Fights galore.  Over-the-top villains.  Even some mystery added in to make all the mindless violence interesting.  Plus, he even tries to explain why DC keeps rebooting all their titles.  Not that it made a lot of sense, but at least he sorta gives everyone a reason for it — even if it was a little stupid. 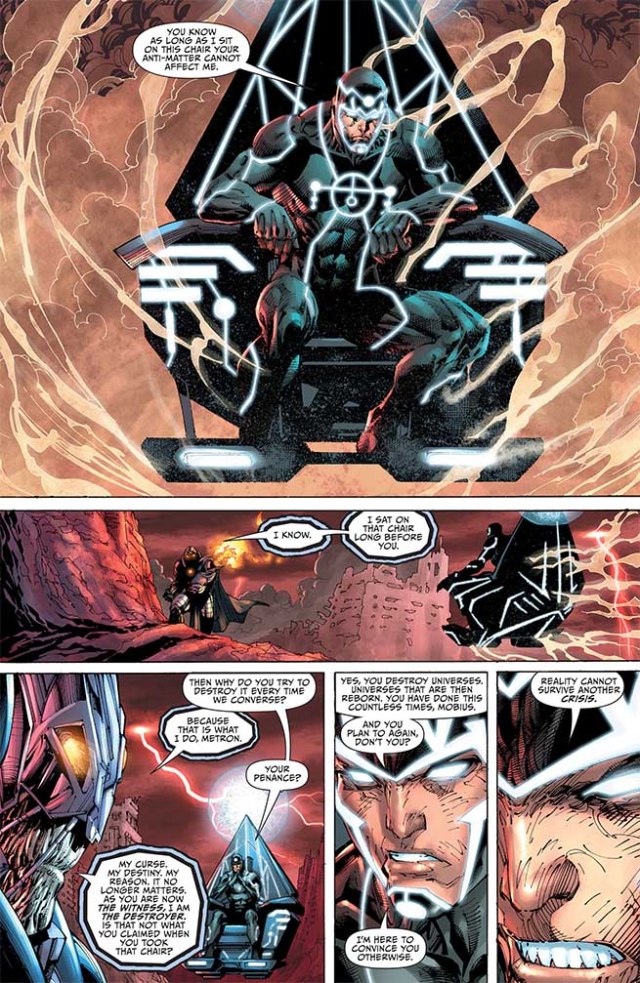 What keeps me reading DC is the characters though.  The Justice League is all about Superman, Batman, Wonder Woman, Flash, and everyone else taking on impossible enemies and finding a way to win.  These guys are the best superheroes out there.  I mean, I love the Marvel movies and all, but the comics lately have not been for me.  Supes, Bats, and Diana never let me down though.  In Justice League, they seem to take turns being awesome.  Here Batman was the best.  If you take him out, then this whole book would have went down hill for me.

As for the artwork, I really liked it.  The fights were cool.  Everyone looked cool.  I don’t know what else to say about it since I’m not an artist.

Well I hope you liked my review, and I really hope you will want to read this book now, because Justice League is one of the best things going.

Connor is a preteen who enjoys graphic novels (DC Comics are preferred), superhero movies (Captain America is his favorite), watching episodes of The Flash, Arrow, Smallville and American Pickers as well as the NFL, NCAA football, and the NBA on t.v., will happily accept any and all caps (because you just can’t have too many caps), and whose favorite music revolves around pop favorites of the moment such as Cake by the Ocean (Clean version because dad is still alive) as well as anything by Fall Out Boy — except for the new Ghostbusters (I’m Not Afraid) song which Connor denies they were ever involved with.  And, no, Connor did not have any input into my paragraph about him.  Being a dad does have it’s privileges.  🙂