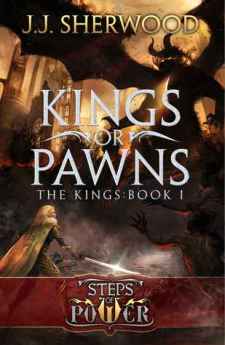 Kings or Pawns by J.J. Sherwood

J.J. Sherwood introduces us to the elven Realm  of Sevrigel with her debut novel Kings or Pawns, conveying readers to a complex, diverse land where young King Hairem attempts to tame the corrupt political machinations of the capital city while his General Jikun strives to defeat the seemingly invincible forces of Lord Saebellus and his beast.   Their individual quests forcing them to brave tense council room intrigue, dabble with outlawed and soul destroying magic,  strive to trust one another, win unwinnable battles, and somehow find a way to hold their kingdom together when it appears to be unraveling before their eyes.

The main theme weaving throughout this narrative is one of trust.  Does young, idealistic King Hairem trust those around him?  The stuffy, arrogant, (and perhaps corrupted) council?  His blunt, jaded general?  The beautiful daughter of a political rival whom he believes he loves?  Or should he trust his own intuitions and break with the deeply held traditions of his people, forging a new way for all of them?

As for General Jikun, he must deal with a different form of trust, specifically his mistrust.  He did not trust King Hairem’s father, and, now, he doesn’t trust in his new liege, specifically his ability to control the seemingly compromised members of his government.  He doesn’t trust his closest confidant, Captain Navon, from practicing the dark arts of necromancy — for all the right reasons. He doesn’t trust the upbringing ingrained in him by his family in the icy tundra of far off Darival.  Hell, he doesn’t even trust himself to love his beloved Kaivervi.  And, most worrisome, he has no trust in his ability to defeat Lord Saebellus and his beast.

The key strength to this narrative is the characters.  Instantly, a reader will gain a feeling for who and what King Hairem and General Jikun are.  Their differing personalities quickly sketched out; their differences highlighted by a meeting at the beginning of the story.  The course of their individual journeys and their growing relationship organically grown throughout.  Above of all else, their motives drive them toward a single goal they can agree upon: the survival and resurrection of the Kingdom of Sevrigel.

I have to admit loving the world Sherwood has created here.  The amount of worldbuilding is immense.  Tiny details involving history, religion, politics, magic, and social customs littered about the narrative.  All of it surprisingly rich, Tolkien-esque, if you will, with differing cultures that felt real and with characters who were different, not just said to be different.  And other than a few info dumps in the first few chapters, the worldbuilding was craftily woven into the ongoing action and intrigue, seamlessly devoured without any noticing it was happening. The entirety of it the author achievement very impressive, as I feel I learned so much about this place without ever feeling distracted from the plot itself.

The main criticism I have with the novel is the lack of antagonists in the book.  Yes, Lord Saebellus is mentioned throughout, everyone saying what a total badass he and his beast are, but — except for a few prologue pages — we don’t see him at all until the end.  Rather, he is a ghostly presence in the background.  People say he should be feared.  People act as if he could destroy everyone and everything, but no one seems terribly worried about it until the last quarter of the book.  And even the assassins and centaurs (who also share the role of antagonists) are more lightning flashes of badness before they are quickly gone.  I totally understand the approach to keep the main villain in the background, build up the suspense before revealing him in all his dark glory, but here it did not work quite as well due to the lack of fear the main characters seemed to have for him.

J.J. Sherwood has gifted epic fantasy readers with a real treat in Kings or Pawns.  It is a well-built fantasy with complex characters, serious themes, adventure, action, and a richly, detailed world.  So, if you are looking for a new epic fantasy with the grand feel of The Lord of the Rings but with the swashbuckling excitement of Salvatore’s The Legend of Drizzt, you have found it in Kings or Pawns.  I am eagerly looking forward to the next installment in the series.

2 Responses to KINGS OR PAWNS