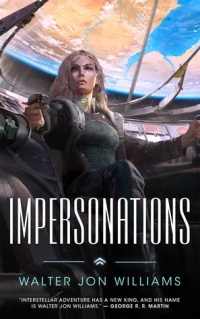 Having offended her superiors by winning a battle without permission, Caroline Sula has been posted to the planet Earth, a dismal backwater where careers go to die. But Sula has always been fascinated by Earth history, and she plans to reward herself with a long, happy vacation amid the ancient monuments of humanity’s home world.

Sula may be an Earth history buff, but there are aspects of her own history she doesn’t want known. Exposure is threatened when an old acquaintance turns up unexpectedly. Someone seems to be forging evidence that would send her to prison. And all that is before someone tries to kill her.

If she’s going to survive, Sula has no choice but to make some history of her own.

Hammers on Bone by Cassandra Khaw

John Persons is a private investigator with a distasteful job from an unlikely client. He’s been hired by a ten-year-old to kill the kid’s stepdad, McKinsey. The man in question is abusive, abrasive, and abominable.

He’s also a monster, which makes Persons the perfect thing to hunt him. Over the course of his ancient, arcane existence, he’s hunted gods and demons, and broken them in his teeth.

As Persons investigates the horrible McKinsey, he realizes that he carries something far darker than the expected social evils. He’s infected with an alien presence, and he’s spreading that monstrosity far and wide. Luckily Persons is no stranger to the occult, being an ancient and magical intelligence himself. The question is whether the private dick can take down the abusive stepdad without releasing the holds on his own horrifying potential.

1 Response to STACKING THE SHELVES, VOL. 29