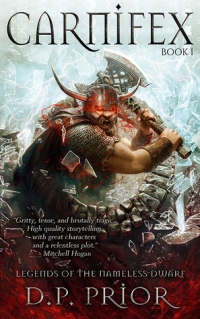 Carnifex is a masterpiece of sword and sorcery storytelling. A visceral yet thoughtful epic of a dwarf (Carnifex), his people (the dwarfs of Arx Cravis), and a series of unusual occurrences which point toward an ominous future for our bearded protagonist. And whether you are already a fan of D.P. Prior’s Aethir books (Shader, The Nameless Dwarf, and Husk) or a newcomer to the paradoxical world of Aethir, this novel is an amazing place to start your journey, because it is as smooth a sword and sorcery brew as has been concocted in many a year.

The story begins as most fantasy tales do these days – the middle. Well, not the middle, really, but rather someplace other than the beginning. I mean, beginnings are tedious affairs. That is why it is better to skip to the point in time when things get exciting – which is exactly where Mr. Prior starts this one.

Here Carnifex Thane is a fairly content Ravine Guard (i.e. City Guard) for Arx Gravis. He is still young (but not that young anymore), has a close relationship with his aged father and his older brother, and spends a considerable amount of time drinking with his closest friends. The majority of his life is the normal routine of work, home, and pubs. In fact, nothing exciting really happens in Carn’s life, because the dwarfs don’t allow anything unusual to occur; Arx Gravis being a tightly woven community, which lives by the unspoken mantra of peace, plenty, and no outside influences.

What do I mean by “no outside influences”? Simply put: non-dwarves aren’t welcomed in Arx Gravis. No traders. No visitors. No enemies (not that the dwarfs really have any). No foreign ideas. Everything is strictly monitored and controlled by the Council of Twelve; Arx Gravis’ most sacred tenant to maintain the status quo and, in doing so, keep mistakes from being made which might lead to a repeat of the distant past when a dwarf almost helped “unmake” all of reality!

But as Carnifex begins, usual things are beginning to happen, no matter the dwarves best efforts to ignore them. The catalyst to it all the arrival of the human philosopher, Aristodeus, who is an old, old friend of Carn’s family. Quickly, legendary nemesis after legendary nemesis of the dwarves arise. The people of Arx Gravis constantly confronted by the spectacle that the ancient stories of their people might actually be true. Their eternal efforts to remain in limbo leaving them ill prepared to defend themselves. People die. Defenders arise. Carninex among them. And all the while Aristodeus remains an active participant of the defense, denying any involvement in the occurrences, but warning of forthcoming horrors if ancient means of defense are not rediscovered!

And while the dwarven people deal with their tormentors, Carn deals with even more personal issues. His very stable personal life beginning to quickly unravel around him; the foundation of his world slowly crumbling away, driving him down a road toward a destiny which Aristodeus whispers is more terrible than he deserves.

As most of my readers know, I am a long time lover of sword and sorcery. I also adore dwarfs. Blame Michael Moorcock and J.R.R. Tolkien if you must, but those two iconic fantasy authors mesmerized me during my formative years, leaving an indelible mark on my reading habits. So I had no doubt when I picked up Mr. Prior’s Carnifex that I would enjoy it immensely. (Damn, look at that cover!)  But since many of you are not life long sword and sorcery fans, I imagine you’d like me to explain why you should try this novel out, and why you will enjoy it. To help me do this, I’ve decided to compile the

10) Short, bearded guys running around going berserker on everyone, swinging around double-bladed axes which are almost as big as they are!

9) A mysterious human philosopher who seems to know too much and might be manipulating things behind the scenes!

8) A fierce dwarf fighter with a heart of gold but an ominous destiny foretold!

5) A delicious mixture of bloody fighting and ordinary life moments, where the characters develop into real people.

4) A well developed mystery which keeps you guessing until the very end.

3) Bedazzled dwarven ladies with ringlets and bows in their beards!

2) A fast paced narrative which is very smooth upon your reading palate!

1) The realization that the finale of this story promises every more amazing things to come!

Hopefully, my top ten list has peaked your interest enough to pick up this novel.  Yes, I know sword and sorcery is an acquired taste, but I’d recommend that some of you begin your sampling of it with this tale.  If, however, this very eloquent and enthusiastic review hasn’t convinced you to do so, have no fear, because I already have book two of this series waiting on my e-reader and will be reviewing it soon!