ONLY THE STONES SURVIVE 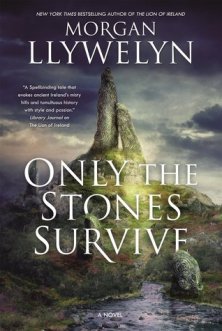 This was my first foray into Morgan Llywelyn’s Celtic historical fantasy novels.  Sure, I’ve seen them on the bookshelves here and there, heard of the awards the author has garnered, but I’d never taken the time to open one up and experience the vivid worlds which she crafts so effortlessly.  Now, I find myself regretting that decision.

In Only the Stones Survive, a reader is carefully deposited upon the island of Eire.  Here the ancient tribe of the Tuatha Dé Danann (Who might be extraterrestrial or supernatural in origins!) shepherd over the peaceful land, living in harmony with nature and preferring to be left alone by all those mariners (traders and settlers) alike who would disturb their harmonic existence.  To this end, they have set aside their ancient weapons of destruction, only using their magic in limited ways to shield the emerald isle from would-be invaders.

Into this endless rhythm of the seasons and eternal peace grows Joss. This young Danann is our narrator, introducing the carefree existence of his youth, the peaceful nature of his people, and their shadowy origins.  And it is through Joss’ eyes and through his words that Morgan Llywelyn carefully and beautifully portrays the end of his civilization.

When Joss is still considered a child among his people, seafarers from Iberia first appear.  These poor, desperate Gaulic tribes have gambled their lives and the future of their people on building boats (Most are not worthy of the title ship.) and setting off in search of the fabled island of Eire, where they intend to settle and build a new life for themselves.  And while they are war-like and savage in their ways — at least as compared to the softhearted Dananns –, their motives are rational enough and familiar enough that it is difficult to hate them completely, even the worst of them.

As the story quickly grows from this beginning, the narrative highlights the struggle of people against people.  Each race endowed with their good and bad qualities; each desperately attempting to survive and thrive in their chosen way; and each the antithesis of the other until there appears to be no hope of peaceful co-existence.

For me, the most memorable element of this book was the beautiful writing.  It isn’t complex or filled with wonderfully crafted sentences as much as it is lyrical in nature.  As I read, Llywelyn’s words reminded me of a poem recited or a melody sung.  The whole book transcending the specific story being told and instead becoming a living, breathing epic.

The other notable feature was the many philosophical features of the Danann’s conversations.

“Time is an illusion with a purpose.”

“Live your life in the expectation of sudden joy, Joss.”

The Danann’s preferred “the steady glow of serenity to the destructive tarnish of commerce, whereby everything was bought and sold and nothing was ever enough.”

These were merely a few of favorites, which I underlined and bookmarked.  Not everyone might enjoy these types of conversations between characters, but I found them very refreshing, uniquely compelling, and  immensely insightful as I had to watch the old give way to the new.

The only criticism I could level against the novel would be that the characters are not as important to the tale as the historical events taking place.  Or, to put it another way, the story is about the clash of two cultures, not Joss or any other person’s role in it all.  Sure, many people are tightly woven into the tale, catalysts for one important event or another, but they are caught up in the events, not controlling them, which caused me to view them as swimmers attempting to ride the crest of a wave even as they sense it is heading to its inevitable crash onto the shore.

All in all, I found Only the Stones Survive a wonderful introduction to Morgan Llwelyn’s Celtic tales.  The beautiful, lyrical writing drew me in, and the clash of cultures kept me turning pages, as I wished against all hope and logic for Joss’ world to remain unchanged.  But, then again, every ending is merely a new beginning, and so it is in this one as well, as a fresh, beautiful world arises from the ashes of the old.

I received this novel from Forge Books in return for a honest and unbiased review.  The opinion you have read is mine and was not influenced by anyone else.