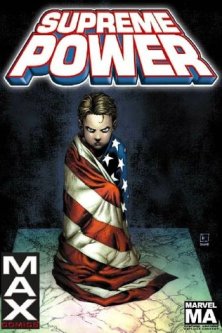 The Squadron Supreme has been around for a while in the Marvel Universe, acting as the MU’s alternate dimension “Justice League” whenever a JLA versus Marvel story was written. That changed a great deal in 1985 though; Mark Gruenwald and Bob Hall releasing an extremely thought-provoking 12-issue miniseries entitled Squadron Supreme, where these heroes decide to take over the world in order fix all its problems, resulting in horrible things all around and a lot of character development. It might not have been Watchmen, but in a lot of ways, Squadron Supreme was just as powerful to its readers, presenting serious messages wrapped inside its traditional looking superhero story, and it definitely was the first step in these characters’ evolution away from mere DCU copycats.

Flash forward to 2003. Marvel was turning everything into a mature title then, and so Supreme Power was born. Sure, it was still a JLA look alike, but Stracyzinski’s story was a gritty, hard-hitting and realistic take on superheroes in the modern world. There was nudity, violence, conspiracies, cover-ups, and riveting plots. Heroes weren’t always likable, and villains were relatable. Especially cool were our updated cast of characters, who were tantalizingly familiar yet so different from their obvious DCU models. Let’s get to know them better.

Mark Milton aka Hyperion (Superman) is an alien who was taken from the farmers who discovered his space capsule by the government. Raised in secret according to strict standards and brainwashed with pro-American propaganda all his life, he becomes the perfect military weapon. Unfortunately for the US, Mark Milton slowly begins to realize his whole life was a lie; his confusion and anger at his treatment by those he believed loved him driving his story.

Kyle Richmond aka Nighthawk (Batman) is a young, affluent African-American man who had to watch his parents be gunned down by white racists. Now, he fights crime as a masked vigilante, but he seems to be just as racist as the people who destroyed his childhood.

Zarda (Wonder Woman) is some kind of vampiric alien or goddess. She seems to have been around since ancient Greek times and has survived by devouring her loyal followers. She only arises from her tomb due Hyperion showing up; there being some shadowy connection between the two of them. 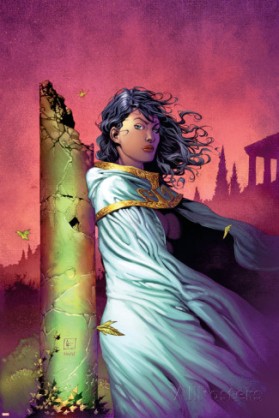 The Atlanta Blur (Flash) is a young African-American man who is dedicated to taking care of his mother and providing for her financial. When he amazingly discovers he has super speed, he uses his power to become a celebrity, turning his fame into a lucrative business full of commercials, tv appearances, and endorsement deals.

Joseph Ledger aka Doctor Spectrum (Green Lantern) is a US soldier who is chosen for a secret experiment involving a crystal taken from Hyperion’s space capsule. Inevitably, Ledger is “bonded” to the mysterious and powerful gem, using his new abilities as another secret operative for the government and as a possible deterrent against Hyperion.

Lastly, there is the mermaid-like female Amphibian, who encounters Doctor Spectrum and . . . becomes friends with, falls in love with him, or has an emotional attachment to him.

Naturally, this initial arc entitled “Contact” is just that: the story line which introduces everyone, outlines their history and motives, and propels the story forward to their inevitable contact with one another. Sure, it might be reminiscent of other stories in sections, but overall, Supreme Power weaves an interesting look at how superheroes might look and act in post-9/11 America.

I have to say I really like this story. It has that ultra realistic feel like Watchmen but without all the dark and gloomy art, and while it reads like a standard superhero story, the conspiracies and true-to-life situations and reactions of the characters set it above a lot of other comics in my opinion. Definitely a series that should have gotten a bit more love and appreciation from fans and the powers at Marvel, and one every comic fan should, at least, give a try.