INTERVIEW WITH MICHAEL R. FLETCHER, AUTHOR OF BEYOND REDEMPTION

Michael R. Fletcher published his first novel, the science fiction cyberpunk 88, in 2013. Now, he has entered the fantasy scene with his dazzling grimdark Beyond Redemption; the book garnering praise from many sources including Anthony Ryan, New York Times bestselling author of Blood Song. who wrote “Set in a world where madness equates to power, Michael R. Fletcher’s Beyond Redemption is often as nightmarish as it is fascinating. An alarming, original and compulsive tale laced with a blackly comic sensibility. Highly recommended.” Definitely, a debut author to watch, I am honored Mr. Fletcher has taken some time to answer a few questions.

Hi, Mr. Fletcher, thanks for taking the time to answer a few questions!

My pleasure! Alrighty, let’s see what craziness you have in mind!

Who is your favorite fantasy author– besides yourself, of course? 🙂

This changes all the time and is very much dependant on genre. Right now my favourite fantasy authors are Mark Lawrence, Robin Hobb, and Anthony Ryan. Yeah, can’t really nail it down to just one.

In science fiction I can’t get over how awesome Richard Morgan is.

Damn. Does anyone ever give you a single answer? Okay, there are the books that were the most important/influential for me (Consider Phlebas by Iain Banks, or The Chronicles of Thomas Covenant by Stephan R. Donaldson), and then there were the best written books (nothing happened in Patrick Rothfuss’ The Wise Man’s Fear and yet it was still stunning), and then there’s the book I love the most…which is….I can’t do it! I can’t name just one.

What did your first novel 88 teach you about the

Sadly, I was so focused on the I’m-gonna-be-a-writer high that I missed most of the lessons. The biggest lesson I should have learned is: YOU MUST PROMOTE YOURSELF. These days, if you want to be a writer you also have to be so much more.

Do you still have plans for a sequel to 88?

I do. It’s called 88.1. Unfortunately, there’s a disconnect between my plans and my reality. I hope some day I’ll get to write it.

A favorite fantasy author of mine was quoted as saying people write about what  they think is cool? If that is true, does Beyond Redemption mean you really have a thing for madness?

I know it doesn’t seem like it, but Beyond Redemption is only peripherally about madness. It’s more a look at how things would be if we lived in a reality that responded to our beliefs. Normal people—people you’d consider perfectly sane—believe all manner of crazy shit. Some invisible dude in the sky wants me to do/wear/say/kill/save something. This politician will be different than the last thousand. Processed grains are real food. It really matters that my child uses the correct fork. I’m too fat/thin. If I make more money I’ll finally be happy.

I use crazy people to poke at sane people.

Or maybe not. Maybe I have a fixation with the deranged.

I’ve read that as a seventeen year music industry survivor you believe musicians  have to be delusional and somewhat sociopathic to make it in the industry. Do you believe the same applies to writers?

Writers need a host of other delusions!

How long was the idea for Beyond Redemption percolating in your mind before you actually put it down onto paper?

I had the idea about a year before I actually started on the book. In that time I wrote a few short stories exploring the premise and trying to decide what kind of world it should take place in.

At first it was a weird re-imagining of our own history. What would the conflict between the Spanish and Incans have been like if the Spaniards had delusions instead of muskets and the Incans were sane? That story, Fire and Flesh, appeared in Arcane II.

Later the story moved into the desert and out of anything analogous to our world. That story, At the Walls of Sinnlos, will be appearing in the January 2016 issue of Grimdark Magazine.

For Beyond Redemption the world changed yet again. I wanted something small and suffocating.

Yes, and I worry it wasn’t such a great idea. Damned near every piece of writing advice I’ve sever seen says to make sure people can relate to at least one character. Unfortunately I didn’t start reading books on how to write until after I’d written Beyond Redemption. Uh…you’ve read it…which one did you relate to?

At the time I was in a dark place (actually it was the sound-booth of a really dank and shitty rock club) and it seemed to me that people were too stupid to learn or change. That, combined with my annoyance at seeing pretty people with nice hair gracing the cover of virtually every fantasy book, drove me to write something different.

In Beyond Redemption, insanity is the key to power. Sure, the characters may
have some bizarre psychosis like pyromania, et cetera, but it is this very insanity that allows them to influence the world around them. Was there any single moment where this idea struck you, or did it gradually evolve over time?

It was a slow evolution. It came from looking at cultural conflicts as a war of ideals and beliefs—rather than muskets and spears—and grew from there. At first I didn’t see it as a conflict on a personal level; I was looking at how the beliefs of the Spaniards were warring with the world-view of the Incan Empire.

The only character who doesn’t seem to be insane in the book is Bedeckt. Or is
he? The fact that he is so sure of his sanity left me wondering if he might not be the craziest bastard of the whole bunch. Am I on to something or just crazy as shite?

I can’t answer that. Shush! That’s The Mirror’s Truth!

Obviously, the conclusion of Beyond Redemption demands another book. Tell us your plans for the series going forward.

I never do anything the easy way. If I did, I’d have planned everything out and would know where the madness ends. I don’t.

The Mirror’s Truth, the sequel to Beyond Redemption, is written. I’ve also written another book in the same world called, The All Consuming. This one has a whole new cast of characters. My intent is to crash the two story lines into each other like the most awful and bloody train-wreck. I keep thinking the last book will be called A War to End All.

What if the hero doesn’t save the world because there is no hero?

I’ve also started world building on an entire new series taking place elsewhere in the world of Manifest Delusions. It’s too early to talk about it.

Have you felt any pressure to be more active on social media to promote Beyond Redemption? If so, how do you feel about adding that to your other tasks as an author?

At first it seemed like a terrible burden, but I read something from Mark Lawrence about how he treated social media as a chance to talk to other folks who enjoyed the same stuff he did. That really clicked for me. Since then it hasn’t seemed like a burden and I’ve met a lot of awesome people. I reached out to the fantasy community to help me publicize Beyond Redemption (have I mentioned the name of the book enough?) and the response has been amazing and humbling. So while I’m desperate to get back to writing the next book, I’d better make sure there’s a demand for that book.

I’ve read that you and some friends created your own role playing game system.  Any plans to create a Beyond Redemption game system and release that to RPG fans?

Yes, but it won’t be for a long time. It’s a complex system (the skill/stat system is a recursive feedback loop) and at the moment requires many pages of spreadsheets to play. We’re working on a custom app that’ll run on tablets to make it all friendlier. The plan is to connect the GM with the players in a way no game has ever achieved. Imagine being able to tweak character stats and skills without the player seeing, being able to give them a description and then leave them wondering why they’re having trouble hitting people with that new sword they found.

Seriously though, don’t hold your breath. We all have jobs and mortgages and children. 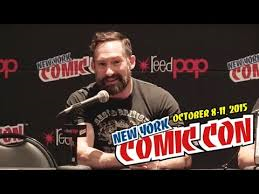 Conventions: love them or leave them?

Confession: I have only ever been to one convention. I was invited to NYCC 2015 to speak on a panel about metal music and writing SF/F with Myke Cole and Peter Orullian and that was my introduction to cons. It was awesome! I’d totally do that again. First I’ll need to learn some social skills.

Is my wife going to read this?

Michael R. Fletcher is a science fiction and fantasy author. His novel, Beyond Redemption, a work of dark fantasy and rampant delusion, was published by HARPER Voyager.

The next two Manifest Delusions novels, THE ALL CONSUMING, and WHEN FAR-GONE DEAD RETURN are currently in various stages of editing while Michael tries to be the best husband and dad he can be.

6 Responses to INTERVIEW WITH MICHAEL R. FLETCHER, AUTHOR OF BEYOND REDEMPTION