FUN DAY MONDAY, OR THE BOOKS THAT WILL HELP ME SURVIVE THE WEEK AHEAD (December 7, 2015)

Posted on December 7, 2015 by Bookwraiths

This week I’m finishing off a book that I began last week which took me by surprise as to how good it really is. 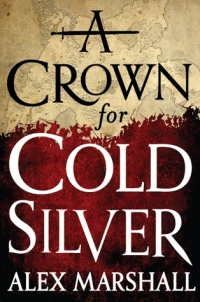 A Crown for Cold Silver by Alex Marshall

FIVE VILLAINS. ONE LEGENDARY GENERAL. A FINAL QUEST FOR VENGEANCE.

Twenty years ago, feared general Cobalt Zosia led her five villainous captains and mercenary army into battle, wrestling monsters and toppling an empire. When there were no more titles to win and no more worlds to conquer, she retired and gave up her legend to history.

Now the peace she carved for herself has been shattered by the unprovoked slaughter of her village. Seeking bloody vengeance, Zosia heads for battle once more, but to find justice she must confront grudge-bearing enemies, once-loyal allies, and an unknown army that marches under a familiar banner.

“This is my favorite kind of fantasy — alternatively irreverent and brutal, with a cast of wonderfully scarred and nasty people. Any fans of Steven Erikson, Mark Lawrence, or Joe Abercrombie will love A Crown for Cold Silver; I’ve just finished it, and I’m already eager for more.”―Django Wexler

“Alex Marshall builds a sprawling world that grows larger and deeper with every page. Instantly believable. Zosia and her Five Villains are as fun as they are twisted.”―David Dalglish

“An epic fantasy that will surprise you. When was the last time you read one of those? Marshall deftly sets up and subverts expectations at every turn. If you think you know what’s coming, think again.”―Kameron Hurley

6 Responses to FUN DAY MONDAY, OR THE BOOKS THAT WILL HELP ME SURVIVE THE WEEK AHEAD (December 7, 2015)