GIDEON SMITH AND THE MASK OF THE RIPPER 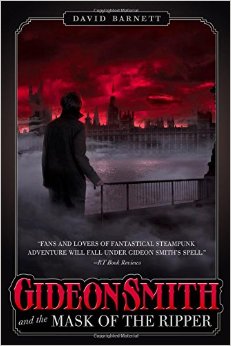 Gideon Smith and the Mask of the Ripper by David Barnett

Steampunk. Alternate history. Victorian fantasy. David Barnett’s Gideon Smith series can easily fit into any of those sub-genre of speculative fiction. No matter the label, however, one thing holds true for Mask of the Ripper and its predecessors: They are each rousing tales of daring-do with memorable characters who will sweep you away into adventure after adventure.

As frequent readers already are aware, the first two books of the series took our young Gideon Smith from daydreaming about pulp adventures in his home town to living them in exotic locals such as Egypt. Amazing discovers were made; heroes were uncovered as fakes; vicious enemies revealed and vanquished, and through it all, small town dreamer Gideon Smith became the new “Hero of the Empire” — a position of importance and one which granted him instant celebrity status in jolly old England. Only one problem, whenever there is a crisis, Gideon can’t hide from the requests to fix it already.

As Mask of the Ripper begins, our weary hero has settled down in London, attempting to enjoy some well earned rest and relaxation from world spanning adventures – at least for a short time. Sadly, it is not to be though, for trouble seems to follow poor, old Gideon . . . or he follows it. (I’m not sure which, but you get the idea, anyway.)

The problem Gideon now finds himself confronted with is the mysterious murders taking place in London. These horrendous deaths have become a nightly occurrence. Prostitutes gruesomely slain. People near paralyzed with fear. And the name plastered across the headlines is Jack the Ripper!

Naturally, the masses turn to their “Hero of the Empire” and his friends (Rowena Fanshawe, Aloysius Bent, and Maria the Mechanical Girl) to save them from the nightmare. And though he is initially reluctant, Gideon eventually succumbs to the pleadings and sets off alone to uncover the true identity of this murder. A personal guest which very quickly goes awry.

When their friend takes this action, Rowena and Maria find themselves cast adrift; each walking their own path of inner discovery and gritty adventure. Tests of their own inner fortitude unexpectedly arise, forcing them to confront head-on their own demons and brave the most untenable situations.

And Aloysius . . . well, he does what he always does best: find a good angle to play and be around to help when absolutely necessary.

There is a lot to love about Gideon Smith and the Mask of the Ripper. Filled with non-stop action, steampunk fun, and a surprising amount of character development, Mr. Barnett begins the process of evolving this series beyond just Gideon Smith. Sure, our plucky hero is still the star of the show, but Rowena and Maria are now given very emotional and powerful story lines, narratives which transform them from near sidekicks (though I never viewed them as such) into co-stars. A decision which opens up infinite possibilities for the continued growth of the series into the future.

If I was forced to name a deficiency of the novel, the only one I see is that it is different, and while change is good, it is still change. Here the transition from the very straightforward adventure tale of Gideon to that of the “Hero of the Empire and Associates” is deftly handled, but without a doubt, Mask of the Ripper is different from its predecessors in tone and perspective. Not necessarily a bad thing, just a different thing, and frequent readers will have to decide if they enjoy the new recipe or not.

As for me, I thoroughly enjoyed this new and improved Gideon Smith. Fun, insightful, filled with humors comments and rollicking action, it was the perfect steampunk . . . err, alternate fiction . . . ahhh, Victorian fantasy novel to sit down and lose myself in.

2 Responses to GIDEON SMITH AND THE MASK OF THE RIPPER