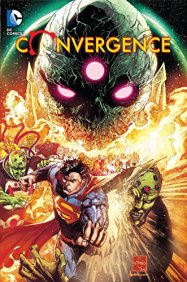 Convergence is the series that set out to put the Infinite back into the DC’s multiverse. Because, back before 1985’s Crisis on Infinite Earths, there existed all these infinite worlds with innumerable versions of all the DC characters as well as less well-known characters for writers to use in their stories. And since the New 52 reboot wasn’t living up to plans, DC decides to reinstate the infinite earths multiverse to allow creators to tell whatever stories they wanted to without having to be so concerned with continuity.

Sounds like a decent idea, right? At least in theory. But before those new stories from the new-old infinite earths could start rolling out, DC needed to reboot everything with this Convergence multi-volume crossover event of the century . . . the year . . . the month . . . well, the one DC just did – until they start the next one.

As for story itself, Convergence starts out fine if not spectacular. The heroes from Earth-2 escaping their soon-to-be-destroyed planet only to find themselves whisked away by some strange alien being called Telos who works for Brainiac.

Quickly, our Earth-2 heroes discover that Brainiac has trapped entire cities on a living planet, where Telos is suppose to be the zoo keeper until the big Brain needs these test subjects. Naturally, Telos gets bored when his boss leaves for a while and decides to entertain himself by forcing cities and their superheroes to fight against one another in battle royale-style conflicts. The losers and their city paying the ultimate price for defeat. (No, I’m not going to mention how this sounds eerily like Secret Wars or Galactus and the Silver Surfer or anything like that.)

Out of this chaos, the Convergence creative team is able to parade dozens and dozens of DC characters across the pages; each one getting a little face time before being pushed to the side. Fight after fight follows each new hero introduction until finally the tale turns into a roller coaster ride of team-ups, twisted motives, god-like monologues, and eventually an ending where things turn out exactly as you imagined: the infinite earths of the DCU reestablished in heroic style.

As to whether I liked Convergence or not, I guess I’d say it was okay. Not much different than every one of these massive reboot series. And while I’m glad the infinite earths are back (including the New 52, I might add), I think a huge series to accomplish that wasn’t really needed. But then again, I’ve never been a big fan of these things. Honestly, I didn’t love Crisis on Infinite Earths back in the mid-1980s either.

But should you read it?

Totally up to you. You don’t have to read it to understand the new DCU.  But it might gain you some closure on a few titles or characters and get you ready for the new infinite earths DCU. So use your best judgment.