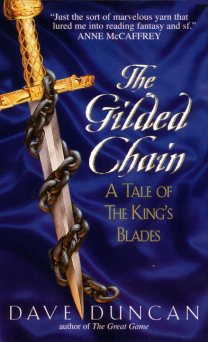 The Gilded Chain by Dave Duncan

The Gilded Chain begins the six book series The King’s Blades by Dave Duncan. (If one includes the companion young adult trilogy The King’s Daggers, then there are nine novels in this fantasy world.) The unique thing about The King’s Blades series is that every book is a stand alone tale set in the same world but with brand new characters and different adventures; something that all readers weary of long multi-volume, interconnected fantasy works should appreciate. For whatever reason though, this is a swashbuckling story that has largely went under the radar of most fantasy aficionados, but shouldn’t for reasons I’ll try to point out.

This opening installment of the series focuses in on a young, unwanted youth who finds himself dumped at the school for the King’s Blades by his uncaring benefactors. While he does go through a recruitment process (or interview if you will), Mr. Duncan keeps it very short, laying out just enough facts to get a reader acclimated to the type of school this is before jumping ahead many years.

Now, our young waif is proudly called Durendal; a special name he took for himself in emulation of the legendary Durendal, who is considered the greatest King’s Blade to ever grace the kingdom. And while it is a lofty bar to set for himself, the youth has lived up to it so far, and is eagerly awaiting the call of the King when he will be bound to his sovereign or to another whom the King has chosen for him.

This binding is what makes the Blades the most feared swordsman in the realms. For this ceremony of allegiance is a sorcerous affair whereby their old self is killed and a new one arises that is soul sworn to obey and protect the life of their liege lord above their own in every way. This results in Blades not requiring sleep, despising the taste of alcohol or any substance that would dull their senses, remaining on constant alert for any threat to their lord, refusing to be bought or bribed, and always fighting to the death without any qualm. It is a difficult life to be among the King’s Blade, but one of the highest honor for every member of the school.

Since Durendal is a special student, primed for great things, it would seem inevitable that he would immediately be thrust into grand affairs. Mr. Duncan doesn’t follow that normal route however, choosing to put our youth through the wringer for a bit before he eventually finds his bearings upon a grand quest to another part of the world. Durendal’s task to uncover the fate of a missing Blade who was on a secret mission for the King himself; his orders to return the Blade or dispose of him and finish the mission if he can.

The unique thing about The Gilded Chain is the way Mr. Duncan designs the narrative. It is a flip-flop affair where we flash back and forth from the old Durendal and the young. Somewhat confusing political intrigue that is taking place in the present ultimately are explained by these visits to our hero’s pasts. Clues and answer to the present mystery are mined directly from that same story of Durendal’s life. And while it causes the narrative to read slowly at first, it eventually becomes a very compelling piece of writing that livens up the story considerably.

For world-building fans out there, I should warn you that there isn’t anything inherently unique or new in this setting. Chivail (Durendal’s home kingdom) is very reminiscent of sixteenth century England with King Ambrose IV strikingly similar to Henry VIII, and the society, technology, and warfare are comparable to that same time period in history. The only difference between Tudor England and Chivail being the integration of magic into this renaissance society.

As he always does, Mr. Duncan has established a creative – albeit simplistic – magic system to set this world apart from other fantasy faire. Here magic is based upon spirits of the eight elements of this world’s cosmology. Invocations abound: both benevolent and sinister, and no one really goes around shooting fire from their eyes or destroying whole armies by waving their hands in the air. So while magic is definitely prevalent in every day life (especially around the King who has magical protectors who “sniff” out magic users), it doesn’t overpower the classic setting.

Overall, The Gilded Chain is a solid, entertaining novel, written in a flowing, easy to read style, steadily paced, and littered with interesting characters, intriguing plots, swashbuckling adventure, and a nice dose of mystery. It even has a nice, twisted ending.

Could this novel be labeled (Because everyone loves labels, right?) a classic fantasy?

Absolutely, Mr. Duncan leans this one toward old school fantasy. Even with that being said however, he writes this story with grittiness and violence (though it isn’t any gorier than necessary); sexual liaisons and situations do occur (but are tastefully mentioned yet never focused excessively on); bad language does get spoken (but the expletives are those of Chivail, which doesn’t exactly match our own real world curse words); and the good guys tend to be imperfect but noble people while the bad guys are imperfect evil people (though a morality play this is not).

So if you are looking for a fun read with some swashbuckling action, a dash of mystery, and a classic fantasy flavor, pick up The Gilded Chain. Don’t let the old school fantasy scare you off.