ACTION COMICS: SUPERMAN AND THE MEN OF STEEL

Action Comics: Superman and the Men of Steel by Grant Morrison

Up in the sky, look: it’s a bird. It’s a plane. IT’S SUPERMAN! And he is faster than a speeding bullet, more powerful than a locomotive, able to leap tall buildings in a single bound.

When I was a kid that is how I always thought of Superman. He wasn’t omnipotent or superhumanly brilliant or god-like. He was just a guy from another planet who was gifted with some amazing powers by our sun. Powers he tried to use to help other people.

Somehow, though, that simpler Superman got lost, as writer after writer made him more and more powerful until he was basically god flying around Metropolis saving the planet every other issue. And, to be honest, I got fairly bored with that guy.

In this revamped New 52 Action Comics, Grant Morrison tries to take Supes back to the good old days of yesteryear. First, he makes Superman more relatable by stripping him of his god-like omnipotence. Sure, he is still superhumanly fast, strong, and can leap tall buildings, but he also gets hurt and can’t fly away into the sunset. Second, Clark isn’t amazingly wise and all knowledgeable. Rather, this young Supes acts like exactly what he is: a young man on his own in the big city for the first time, who is realizing that his abilities can make a difference in the world. And lastly, Clark doesn’t have some master plan. He is making it all up as he goes along, saving the day in his blue jeans and t-shirt. 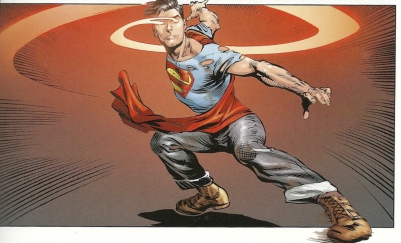 Besides Supes, Morrison also does a lot to freshen up the supporting characters. Lois is still the ambitious reporter, but now she barely notices Clark and doesn’t fall in love with an unknown vigilante jumping buildings or need him rescuing her all the time. Jimmy has turned into Clark Kent’s friend, not a Superman fanboy. The Daily Planet is put more in line with today’s entertainment reality. And the villain Brainic is livened up by becoming “the Internet.” Hell, even the Legion of Superheroes is reintroduced in a pretty cool way.

Unfortunately, with Morrison’s brilliance comes his foibles, and they definitely make an appearance here. Lots of unnecessary stuff goes on in the story for the sole purpose of making things more confusing. Story arcs are left at cliffhangers while the writer takes us off on a side trip to no where. And important parts of the narrative (Like why everyone hates the alien Superman when no one knows he is an alien or have any reason to hate him?) are glossed over so that Morrison can tell the story he wants, reason be damned.

One thing that Morrison’s foibles didn’t affect was the art. Overall, it was very good, and the whole blue jeans and t-shirt costume of this younger Supes is executed very well. Sure, Clark looks like Harry Potter at times, but it didn’t ruin the story for me or anything.

As you can probably tell, I liked this book. It was a very creative devolution of Superman the character, introduced some much needed humanity back into him, and did a great job of entertaining as Morrison did the former things. Ultimately, though, the writers foibles kept me from loving it as many others have.

2 Responses to ACTION COMICS: SUPERMAN AND THE MEN OF STEEL