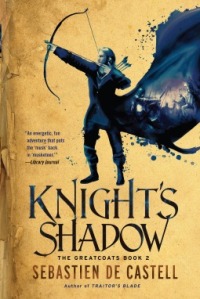 Traitor’s Blade was a novel that took me by surprise. Yes, it sounded interesting, but I never expected to love Sebastien de Castell’s mixture of Three Musketeer-esque swashbuckling fun and Game of Throne-like gritty realism as much as I did. It really was one of the Best Books of 2014.

Flash forward to 2015. Knight’s Shadow is being released. Yes, I’m overwhelming anxious to get my hands on it, but I’m apprehensive as well. I mean, can the author catch lightning in a bottle twice? Can he find a way to include all those great elements from book one, yet minimizing the less stellar ones – like the constant Falcio flashbacks?

Well, after finishing the novel, I can honestly declare that my doubts were unfounded. Not only did Sebastien de Castell meet my wildest expectations, but exceeded them by far, and by doing so set a ridiculously high standard for all books that follow. Knight’s Shadow is truly a masterpiece of storytelling; one that I hereby declare “THE BEST FANTASY NOVEL OF 2015!”

The tale itself picks up shortly after book one’s ending, but does so in a most fascinating way; our hero Falcio val Mond, swordsman extraordinaire and First Cantor of the Greatcoats, finding himself paralyzed. A state he endures every morning. Poison administered by his vilest enemy the cause. But Falcio must overcome, because time is running out to place Aline securely on the throne, and to accomplish this, he has to find a way to persuade the hated Dukes of the land to support her cause.

At this point, Knight’s Shadow content to be a straight forward political story. One that included enough hilarious scenes with Falcio, Kest, and Brasti in full swashbuckling mode to be entertaining, but did not reach for anything other than a credible retelling of book one. But then something happened: Sebastien de Castell pulled the proverbial rug out from under me, revealing a devious plot that might involve the most heinous participation by the Greatcoats themselves, leaving the poisoned Falcio, in his loyal naivete, frantically trying to discover the truth before he dies!

Wow! I hadn’t experienced such a twisted plot line since I first read Martin’s A Song of Ice and Fire many years ago. And this was merely the beginning of the surprises, as Knight’s Shadow jetted into the stratosphere, keeping me turning the pages, as I desperately tried to discover the fate of Falcio and all the other spectacular characters.

That brings up one of the stellar improvements in this book from Traitor’s Blade : the characters development. While Kest, Brasti, Aline, Valiana, and all the rest had their moments in book one, here they come into their own. The joker Brasti, who never seemed serious, displaying an unexpected depth of character, as he deals with the utmost despair and devastation. Kest, the Saint of Swords, struggling to balance his devotion to Falcio and his fellow Greatcoats with his desire to seek out opponents worthy of his time. Aline desiring a normal life away from the Dukes and the deadly machinations of the land, but choosing to forego her own personal happiness to try to help others. Valiana, the spoiled noble turned peasant, who slowly evolves from a hopeless wretch into a woman who is willing to change herself and lay down her own life for a cause she deems right. And Darriana, who is revealed late in the story but plays such a pivotal role in its resolution.

Another area where this installment of Greatcoats excels is in the world building. We find out more about the history of the Greatcoats, the true story of their beloved king, and who the legendary Dashini are. Conflicts that were mentioned in broad terms before, filtered through Falcio’s naive eyes, are now show in all their tangled complexity. Hidden motives, vile betrayals, and devious machinations layered one upon the other until every absolute truth of this world is turned upside down, contorted into amazing new directions that never fail to surprise.

Mixing swashbuckling fun with twisted Martin-esque grimness and set in an amazing world, Knight’s Shadow is an absolute triumph. Creative, brilliant, twisted, emotional, and unforgettable, every one of those labels can be fairly assigned to this novel. “THE BEST BOOK OF 2015!” I declared earlier, and I stand by that pronouncement. Now, all I have to do is patiently wait for book three to be published.

I received this book from Jo Fletcher Publishing and Netgalley in exchange for a fair and honest review. I’d like to thank both of them for allowing me to receive this review copy and inform everyone that the review you have read is my opinion alone.