FUN DAY MONDAY, OR THE BOOKS THAT WILL HELP ME SURVIVE THE WEEK AHEAD (JUNE 1, 2015)

The work week begins. I quickly slip into my business suit and head back into the office to save a few innocent people. But while I try to fool myself into being excited about the grind, deep down, I’m not, so I’m going to escape dreary reality by reading some great books. Without any further ado, here are the novels I will be giving a try this week. 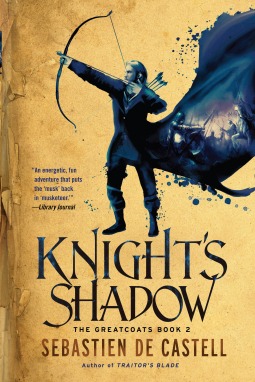 I received this one from the publisher, and I can’t tell you how excited I am to be reading it!

Traitor’s Blade was one of the best books I stumbled upon in 2014, mixing the perfect blend of swashbuckling adventure, prankish camaraderie, and grimdark violence. Obviously, though I was anxious for book this book to be released, I was also nervous that the author couldn’t catch lightning in a bottle twice. Well, after reading 234 pages of Knight’s Shadow, I can assure you that my fears were totally unfounded, because this novel is turning out to be even better than book one!

Here is the Goodreads description of this kickass novel.

“Tristia is a nation overcome by intrigue and corruption. The idealistic young King Paelis is dead and the Greatcoats – legendary travelling magistrates who brought justice to the Kingdom – have been branded as traitors. But just before his head was impaled on a spike, the King swore each of his hundred and forty-four Greatcoats to a different mission.

Falcio Val Mond, First Cantor, with the help of fellow Greatcoats Kest and Brasti, has completed his King’s final task: he has found his Charoites – well, one at least, and she was not quite what they expected. Now they must protect the girl from the many who would see her dead, and place her on the throne of a lawless kingdom. That would be simple enough, if it weren’t for the Daishini, an equally legendary band of assassins, getting in their way, not to forget the Dukes who are determined to hold on to their fractured Kingdoms, or the fact that the heir to the throne is only thirteen years old. Oh, and the poison that is slowly killing Falcio.

That’s not even mentioning the Greatcoat’s Lament…” 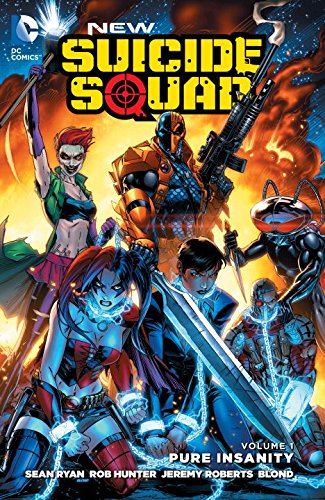 Continuing on my comic collection splurge of late, I received this ebook from the publisher. While I was a fan of the old school Suicide Squad, I can’t say that I am at all familiar with this version. But the description sounded interesting.

“Once a secret to even the highest government officials, the Suicide Squad has emerged from FOREVER EVIL as one of its most popular programs. Its mission: to send incarcerated super villains to carry out impossible missions on foreign soil in exchange for a commuted prison sentence. If they are caught or killed, no government could link these operatives back to the U.S. government. At least, that’s the theory.

This new series begins with a mission in Russia that features two red-hot Batman villains: Harley Quinn and Joker’s Daughter, plus Deadshot, Deathstroke the Terminator, Black Manta and more.

Pre-order this collection at Amazon.

If I finish these up, I’m sure I’ll devour a few more, but these are my focus this week.

So what will you be reading?

4 Responses to FUN DAY MONDAY, OR THE BOOKS THAT WILL HELP ME SURVIVE THE WEEK AHEAD (JUNE 1, 2015)