ARDNEH’S SWORD (EMPIRE OF THE EAST #4) by FRED SABERHAGEN 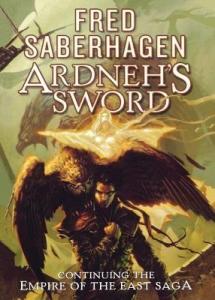 Series: Empire of the East

Ardneh’s Sword is a “bridge” story linking Fred Saberhagen’s Empire of the East series with his later Swords series. And while avid fans have always recognized the world of Swords as being a future iteration of the Empire lands, this novel cements that fact as an absolute truth, providing a rather seamless transition from one series to the next.

The story opens with a thousand years having passed since Ardneh saved humanity from the arch-demon Orcus. That long ago time seems lost in the shadowy past however. Few people believing the legends of an epic clash between magic and technology. But Chance Rolfson is not one of those doubters; he has always believed the legends, as did his ancestors back to the illustrious warrior Rolf – a man who fought evil in Ardneh’s name.

Even though his faith remains undisturbed, Chance finds himself beset by troubling nightmares. Terrifying images of death and destruction that refuse to leave his mind even when he awakes. In a vain attempt to put these dreams behind him, he joins a wilderness expedition searching for Ardneh’s Vault: A legendary place said to hold the savior’s secrets of wisdom and power that can save humanity!

Naturally, things do not go smoothly on the journey; bandits, demon worshipers, demons and even a mysterious djinni with his own schemes causing untold complications and misery for the band. Soon, legendary entities come to life before Chance’s eyes, and he begins to suspect that his nightmares are, in fact, visions of the destruction of the world and that he might be the only one who can unlock Ardneh’s Sword (The ancient savior’s most powerful weapon!) and save everyone!

If that description sounds like a fairly typical Fred Saberhagen fantasy story, I won’t attempt to disagree with you. I thought exactly that as I pounded my way through this sword and sorcery genre blender. Not that Ardneh’s Sword is a clone of the Swords series (The only Saberhagen novels I’ve ever read), but it definitely has the broken landscape and post-apocalyptic vibes, grey heroes and villains, and moody and gloomy atmosphere of the Book of Swords – at least to me. A similarity that is obviously expected to a certain extent (It is a bridge novel after all) and isn’t necessarily bad, but it certainly suggests that if you didn’t love the Empire or Swords series, then you probably won’t have your opinion of the author’s writing changed by this book.

Even with that cautionary warning, there are certainly things to like about this novel. Naturally, the pure adrenaline rush of a sword and sorcery tale is fun, at times. Plus, Saberhagen adds such a cool post-apocalyptic history to the setting that it will undoubtedly stir your curiosity to learn more about the past and the future of this world and its shadowy denizens. And, lastly, there are a couple really interesting characters like the djinni, who are real scene stealers, instantly turning a casual reader into a concerned follower – at least of your favorite character.

Unfortunately, the positives in Ardneh’s Sword didn’t outweigh the negatives for me, because this novel did a few flaws which really jarred my enjoyment of it. Specifically, the story was a bit too formulaic for my tastes and the ending was far too deus ex machina for me to rate it anything other than “okay.” But I can definitely see others adoring it – if for no other reason than they were able to revisit the world of Empire and Swords, gather up yet another morsel of lore about this post-apocalyptic world, and finally know for certain how these two Saberhagen fantasy series fit together.

Recommended for diehard Saberhagen followers, devoted fanboys (and fangirls) of Empire of the East and the Swords series, or for old school sword and sorcery lovers. All others need not apply.

Buy the books at Amazon.