HALF THE WORLD (SHATTERED SEA #2) by JOE ABERCROMBIE 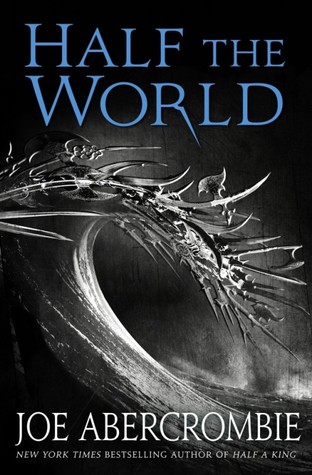 The sands of time have rapidly slipped through the hourglass since Half a King. Now, Father Yarvi is well established as the “deeply cunning” minister of his former uncle, King Uthil of Gettland, and his former mother, Queen Laithlin. But no matter his famed deviousness, Yarvi has not been able to avert the coming confrontation with the High King. Thankfully, however, new heroes have arisen to aid the minster in his task of protecting Gettland.

One of this new generation is a young girl named Thorn, who is determined to become as great a warrior like her father: a man who dueled Grom-gil-Gorm himself. But her sex and her bad attitude has turned more than a few of her fellow warriors against her. And that only gets worse when she inadvertently kills another young man.

Only the intervention of Father Yarvi saves young Thorn. But no act of kindness from the deeply cunning minister is free. And so Thorn finds herself joining Yarvi’s mission to travel around half the world to find allies for the coming war with the High King.

After finishing Half the World, all I can say is that the second helping of grimwhine might have went down a bit better, but it wasn’t any more savory than the first.

The simple truth is that Half the World is just the same old YA story we’ve all read before (in Half a King actually) with different main characters and more travelling.

Half the World still reads more like a historical fiction novel than a fantasy — even with elf ruins thrown in for fun.

Half the World continued to have an inordinate amount of dull, needless pages interspersed with witty or philosophical quotation material.

Half the World once again tried to be clever in its plot and revelations yet failed to surprise at all.

Half the World also lacked any characters of any uniqueness, settling instead for the same retreads seen in most every other YA novel.

Half the World is, at best, an okay grimwhine that obviously wasn’t for me.

Actually, as I write this short review I find that Half the World is already beginning to fade from my mind, which doesn’t surprise me since there was nothing memorable at all about it.

Buy Half the World (Shattered Sea)

SEE MY REVIEW OF SHATTERED SEA BOOK I
HALF A KING