THE LAST OLYMPIAN (PERCY JACKSON & the OLYMPIANS #5) by RICK RIORDAN

Posted on November 5, 2014 by Bookwraiths

The Last Olympian is, I suppose, a fitting conclusion to the Percy Jackson series. It brings together all the memorable characters one last time; lets them take their turn in the spotlight; entertains a long time reader with a novel spanning battle of epic proportions; and then simply and neatly ties up the loose plot threads. So for all those reasons, it is a satisfying ending to one of the most well-known coming-of-age tales in recent memory.

Like all long time readers know, this novel begins with Percy Jackson dreading the inevitable battle with the Titan Lord Kronos, his fellow Titans and their numerous allies as well as the fulfillment of the Delphi’s ominous prophecy. Thankfully, Percy and his half-blood friends have been preparing for this for years though. So they should be able to respond to pretty much anything their enemy throws at them, right?

Wrong. Because this is Percy Jackson and the Olympians, and no planning is ever enough to keep the unexpected from happening. And so, while everyone at Camp Half-Blood knew their odds were going to be grim when the final face-off came about, none of them were expecting how strong Kronos’ army really was. Nor were they anticipating the coldly orchestrated manner in which the Lord of Time goes about dividing his enemies and setting them up for failure. (Something that you would think Athena, goddess of wisdom, or some other experienced demigod would have expected. But I digress.) And so, Percy and his fellow half-bloods find themselves in a familiar spot of trying to save themselves (and the world) from certain destruction with no clear idea of what exactly to do.

The story that is crafted out this chaotic, juvenile mess is a typical Percy Jackson tale that mixes re-imagined Greek mythology with seat-of-your-pants action, a bit of teenage angst, and a lot of daring-do by our young heroes. And while it doesn’t do anything different from the preceding four books, that isn’t a bad thing, because by this point you either like Percy or don’t. No need for Mr. Riordan to change paddles in midstream, so to speak.

But if I was forced to point out something I didn’t enjoy in this book, it would be Percy’s absolute “denseness” 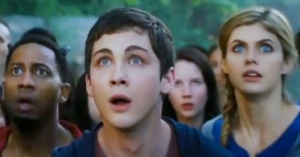 or “absent mindedness” or “clueless-ness” or whatever you want to call it. In The Lightning Thief, it made him endearing and completely relatable, because he was a young teen thrown into a situation which made no sense, and he kept floundering around, trying to figure what was going on. Even in the next three books, “seaweed brain” reacted fairly appropriately, giving that he was continually getting into unexpected situations. But now we are at the final battle. You know, the big confrontation he and all the half-bloods have been preparing for, and it just did not seem realistic, at all, to me that Percy would still be so “OMG, what is going on?”

With that diatribe by my middle-aged self out-of-the-way, I have to say I and my son enjoyed this novel. (My son more than me, but isn’t that the way it should be?) It gave us a huge, ongoing battle worthy of a clash between Kronos and the Greek gods, lots of Percy Jackson heroic denseness, and a resolution to the prophecy that we had been wondering about for so long. Plus seaweed brain finally understood girls. Well, he thinks he does, but all us middle aged men know something that Percy hasn’t understood yet.

Buy The Last Olympian (Percy Jackson and the Olympians, Book 5)