During my teen years back in the early 1980s, my reading consisted of D&D modules/rule books, comics (mainly Marvel), “Choose Your Own Adventure” books, and Star Wars novels. Everything else I sort of stayed away from. But then one day I stumbled on this book by Simon Hawke. 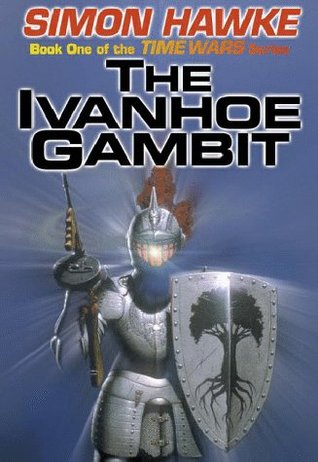 I mean, you have to admit that is a really cool cover. Knight holding a shield and a tommy gun does, sort of, grab your attention. So naturally, I bought it and took it home, and never regretted the decision, because this time-traveling scifi serial began my descent into bibliophile-hood.

The central idea in the Time Wars series is that wars are outlawed in the 27th Century. Well, at least, wars in the present. Instead of laying waste the world, countries have agreed to resolve their disputes by “clocking” soldiers from the present into conflicts of the past. Each nation sends their soldiers back to the agreed upon conflict, and whichever nation has the most soldiers left alive at the end of the war wins. Obviously, there are also “referees” monitoring the count to decide who “won.”

This seemed like a great compromise for a war weary Earth. It was simple, elegant, and effective. The huge military-industrial complex kept getting to fleece humanity for profits. Countries still continued sending young people off to die over ridiculous political issues. But there would be no more collateral damage to anything in the world. All the dying and destruction would happen in the past during a historic war, so a few more dead bodies really wouldn’t change anything. And since the “experts” said nothing the soldiers from the present did could change history, time wars seemed absolutely safe.

Lucas Priest is one of these modern soldiers, and as a member of the U.S. Army Temporal Corps, he has marched with the Roman legions against Hannibal, fought against Crazy Horse with Custer’s 7th Cavalry, and even rode along with Attila the Huns’ horde. But none of those conflicts have prepared him for what he is about to get into, for it seemed that the “experts” were wrong.

Specifically that history could be changed.

In fact, it seems that history could not only be changed it could be absolutely, totally screwed up until no one in the present would even exist anymore – 27th Century Earth disappearing like an unused thread snipped from a pair of pants. Everything Lucas knew his whole life erased from history in a blink of an eye.

Thankfully, Temporal Corps has uncovered this plot by one of the “referees” to change history. Unfortunately, discovering the plot and stopping it are two different things. And since two elite commando teams have already tried and failed, Lucas Priest finds himself drafted into the third and finally team; his part being to impersonate a historical figure close to King Richard the Lion-hearted, so that he can locate the traitor. But can he find the madman and stop him before time runs out? And can he do it without changing history himself?

I really enjoyed this book back in the ’80s. It was a genre blending work of history, fantasy, literary classics, military and science fiction. So much so that it is difficult to describe, because in one chapter you will have military time travelers conversing in a future world only to see them in the next chapter playing out roles as Ivanhoe or Robin Hood, attempting to mimic these people from history without letting their own personalities and feelings bleed through. The fact that sometimes these classic adventure characters were not portrayed in their traditional light made it even more exciting. And that is why The Ivanhoe Gambit was such a sharp, witty, twisted, fun book to read back then and still is today.

Oh, by the way, if you enjoy this book, there are several more novels in the series – each focusing on the same band of time traveling soldiers attempting to fix some temporal screw up or other by exchanging places with or interacting with different literary and historical characters. Each book is a stand alone story, and while they are all out of print, I personally think they’d be well worth a buy at your local used bookstore or as an e-book on Amazon.