Posted on September 2, 2014 by Bookwraiths 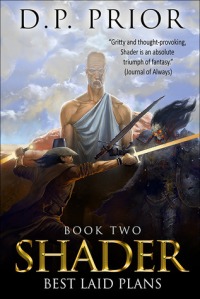 Best Laid Plans picks up right where the first book in the Shader series ended: everyone is scrambling to retrieve the five pieces of the statue of Eingana, winged snake goddess of magic in petrified form. Some people want the statue to protect it; others want it to save themselves; and one wishes its possession to “uncreate” the universe. But whatever the reason, war is brewing on this post-apocalyptic Earth.

To me, the star of this show is the intriguing post-apocalyptic world that Mr. Prior began building in Sword of the Archon. This alternative Earth is a wondrous thing to behold, filled with interesting lore, mysteries galore, vile plots, ancient gods and goddesses, and old world technology. Throughout the narrative, tidbits of its history and lore are slowly revealed, and a reader begins to fathom the world and all the fascinating people it has spawned. However, at no time does the world building seem like info dumping, but rather the author deftly integrates everything into the ongoing plot so that it never slows down the story. I personally haven’t read a better post-apocalyptic world other than The Dark Towerby Stephen King.

But this isn’t a novel about only world building. Nope, the characters are the main highlights, and there are lots of them: each with his own chapters, relaying the story through his or her own individual perspective.

The protagonist here is clearly Deacon Shader, a warrior-monk who metes out death to those he views as evil, and attempts to prevent the “bad guys” from retrieving the statue. Shader’s constant struggles with his waning faith, disillusion with his mentors, and unhappiness with his choices in life are each brilliantly penned, fleshing out this fighting man of faith as more than just a death dealing robot.

Coming in a close second in my favorite character list was the lich lord Dr. Cadman. Sure, he is a flesh-eating vampire-type who has killed and plotted to gain two of the pieces of Eingana, but his emotional disconnect with his own lifestyle and his desire to use the statue to free himself from his sickening life was very compelling. Hell, by the end of the story, I liked reading about Cadman almost as much as I did Shader.

Rounding out my top four favorites were Shadrak the Unseen and Sektis Gandaw. Shadrak is the resident thief and assassin of this story. (Every fantasy has to have one of these, right?) He might be small in stature, but he is big on the attitude and the casual bloodletting. After it was revealed that he is far more than first perceived, this homunculus from the Aether stole more than a few chapters from our hero. And finally, there was Sektis Gandaw: the Sauron of this series. He is the evil dude, living in his technologically created mountain with his scientific toys, determined to destroy the universe because it isn’t perfect enough for his logical mind. Initially, he seems to be your classic bad guy, but soon, Mr. Prior turns Sektis into a multi dimensional character painted all in gray, driven by his desire to “fix” the universe but haunted by feelings that he has been tricked and manipulated into his millennium long quest by powers that he doesn’t believe in.

In many ways, Best Laid Plans is even better that Sword of the Archon. Definitely, the pacing of the story is much quicker with nonstop action; the combat scenes with the mawgs and the final battle between the Imperial Army of Sahul, the Templum, and Cadman’s undead were all riveting affairs; and the ending of the book is completely unexpected in this type of epic fantasy fare, turning the standard trope on its head. However, while all that is true, the book was not quite as “fun” to me as book one, mainly because the build up to the ending was a bit rushed. Certain events seemingly forced to carry a character to a set destination rather than the journey inevitable taking them there freely.

For those of you who have heard of the Shader series by Mr. Prior but never tried it, hopefully this review will pique your interest enough that you will go download it already. For those who have read book one, all I want to know is “Why haven’t you started this one yet?” And for anyone interested in solid, post-apocalyptic fantasy, I’d recommend that you take a look at my review of the first book in the series and read some others, because I truly think this is an indie fantasy series you’d rather nor miss.