This is the time of the week that I post all the great books I’ve picked up recently. Unlike some of my more accomplished book bloggers, most of my reads come from a local used bookstore along with more than a few ARCs off Netgalley, for which I am always grateful. 🙂 But enough about me, let’s talk about some great books.

1. RISE OF THE KING:COMPANIONS CODEX, II by R.A. SALVATORE

Got this one from Wizards of the Coast via Netgalley. Looking forward to getting to it soon.

In the second book of the Companions Codex, the latest series in the New York Times best-selling saga of dark elf Drizzt Do’Urden, R.A. Salvatore picks up with the fan-favorite storyline of dwarf king Bruenor Battlehammer and his bloody feud with the orc kingdom of Many Arrows.

2. THE DARKNESS THAT COMES BEFORE by R. SCOTT BAKKER

Strikingly original in its conception, ambitious in scope, with characters engrossingly and vividly drawn, the first book in R. Scott Bakker’s Prince of Nothing series creates a remarkable world from whole cloth-its language and classes of people, its cities, religions, mysteries, taboos, and rituals-the kind of all-embracing universe Tolkien and Herbert created unforgettably in the epic fantasies The Lord of the Rings and Dune. It’s a world scarred by an apocalyptic past, evoking a time both two thousand years past and two thousand years into the future, as untold thousands gather for a crusade. Among them, two men and two women are ensnared by a mysterious traveler, Anasûrimbor Kellhus-part warrior, part philosopher, part sorcerous, charismatic presence-from lands long thought dead. The Darkness That Comes Before is a history of this great holy war, and like all histories, the survivors write its conclusion. 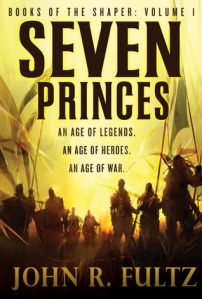 It is an Age of Legends.

Under the watchful eye of the Giants, the kingdoms of Men rose to power. Now, the Giant-King has slain the last of the Serpents and ushered in an era of untold peace and prosperity. Where a fire-blackened desert once stood, golden cities flourish in verdant fields.

It is an Age of Heroes.

But the realms of Man face a new threat– an ancient sorcerer slaughters the rightful King of Yaskatha before the unbelieving eyes of his son, young Prince D’zan. With the Giant-King lost to a mysterious doom, it seems that no one has the power to stop the coming storm.

It is an Age of War.

The fugitive Prince seeks allies across the realms of Men and Giants to liberate his father’s stolen kingdom. Six foreign Princes are tied to his fate. Only one thing is certain: War is coming. 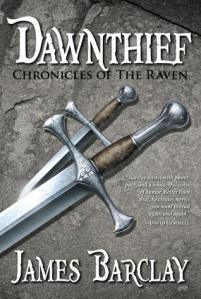 The Raven have fought together for years, six men carving out a living as swords for hire in the war that has torn Balaia apart, loyal only to themselves and their code. But when they agree to escort a Xesteskian mage on a secret mission they are pulled into a world of politics and ancients secrets. For the first time The Raven cannot trust even their own strength and prowess, for the first time their code is in doubt. How is it that they are fighting for one of the most evil colleges of magic known? Searching for the secret location of Dawnthief; a spell that could end the world? Aiming not to destroy it but to cast it …DAWNTHIEF is a fast paced epic about a band of all-too-human heroes.

Not sure when I’ll be able to get to all these novels, but at least, I have them whenever I can find a few spare hours to read.

So what books have you guys picked up this week?