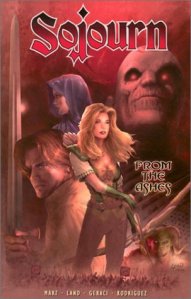 Back in the day, there was a comic publisher that decided to take on the Big Two (DC and Marvel) by doing something different. Headed by the creative team of Barbara Kesel, Mark Waid and Ron Marz, CrossGen comics began publishing stories based not on superheroes but non-traditional comic fare, such as fantasy (Mystic), science fiction (Crux), Victorian detective (Ruse), and samurai action adventure (The Path). Not only that, but CrossGen became one of the first comic publishers to sell subscription to their comics on the internet, allowing subscribers to view all CrossGen’s titles through their web browser. Unfortunately, after some initial success, CrossGen went bankrupt a few years later, but it is easy to enjoy these old series through some really nice trade paperbacks like Sojourn Vol. 1: From the Ashes, which reprints the Sojourn Prequel and issues #1-6.

This epic fantasy series is set in the Five Lands of the planet Quin, which are inhabited by different races. Like most classical fantasy tales, Sojourn employs the standard plot devices of the genre – things like evil-world-conqueror-with-no-redeeming-qualities, hero-who-has-lost-everything-now-determined-for-revenge, and mysterious-magical-entity-helping-guide-hero-for-unknown-reason. Here the “bad guy” is one Mordath, who was killed in the past by a god-like figure named Ayden, but who has now been resurrected and has unleashed unending war and slaughter on the five lands. Opposing this would-be conqueror is a woman archer named Arwyn (I have no idea where the writer got this fantasy name from, do you?) who has her life ripped apart when her city and her family are destroyed by Mordath’s rampaging armies. Thereafter, our beautiful heroine determines to kill Mordath no matter the cost, and so she sets out with her loyal dog Kreeg to do just that.

Along her way to vengeance, Arwyn finds an unlooked for and unlikely partner in the famed one-eyed archer Gareth, who is basically Han Solo with an eyepatch and bow. Together, the two companions and their faithful dog stumble from one intense action scene to another. They fight. They run. They kill. They are almost killed. And the whole time, they continue to look like super models stepping off the page of a fashion magazine. But the one thing that they do not do is kill Mordath in this collection, and that is because of something I like to call the epic quest.

Oh yes, as our two would-be saviors of the five lands bumble their way toward vengeance at any cost, they find themselves saved from certain death by a mysterious sorceress named Neven, and it is she, who in her fantastically obtuse way, explains to Arwyn that she must set forth on an epic quest to recover the pieces of a legendary arrow of Ayden. Only when these pieces are reunited can Mordath be killed. And thus, the ongoing plot line of the comic series is established.

As for the art in this collection, I am somewhat torn in my appreciation for it. On one hand, it is filled with great eye-candy artwork by Greg Land that really pops off the page when you are reading and is filled with cheesecake image after cheesecake image. However, that beautiful artwork is also full of Greg Land’s normal problems of drawing everyone as a super model, having a limited number of male and female models for his characters, and struggling to portray character movement on the page. To further illustrate what I mean, let me point out a few specific details of the art in this collection.

1) Gareth and Arwyn are stunningly beautiful; both of them could have walked off a design show catwalk. Even when they are grieving for dead family, chained in a dungeon, or crawling through sewage, both of them do not have a hair out of place on their gorgeous heads. While that is the norm for a lot of comics, it is so bad in this collection that the character’s impeccable looks make the story unbelievable, because their expressions and poses do not mimic the narrative. I mean, how can Arwyn be posing like she is on the Sports Illustrated Swimsuit cover when she is grieving over a dead child?

2) Many times while reading Sojourn, I had to remind myself that this comic was not The Uncanny X-Men, because Gareth looks amazingly like Scott Summers (Cyclops) from Land’s run there and Arwyn is the twin sister of Emma Frost. Who knew Sojourn was an alternate Marvel world?

3) During fights, Arwyn looks like she is posing for a photo shoot rather than actually drawing her bow or punching an enemy. I’m all for cheesecake pictures in comics, but once again, Land takes this to the extreme in my mind.

After reading Sojourn Vol. 1: From the Ashes, all I can say is that – even with its issues – it was a fun, action adventure comic. Honestly, it is best described as a bubble gum version of the Lord of the Rings movies with action galore, sappy morality, and a few laughs. When you add in a couple of likeable heroes in Arwyn and Gareth, a despicable villain to hate in Mordath plus a loyal dog, you have a paperback version of your latest Hollywood blockbuster action film. Well worth the price of a used copy!

Purchase the graphic novel at Amazon.

5 Responses to SOJOURN by RON MARZ and GREG LAND