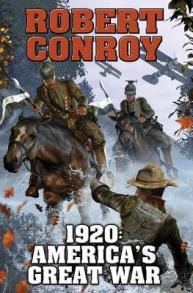 1920: America’s Great War is alternate history at its best. It is fast. It’s fun. It doesn’t take itself too seriously. Nor does it pretend to give you a history lesson in disguise. Nope, Robert Conroy has written a real page-turner with interesting characters and an engrossing plot that does a great job of doing just what it is suppose to do: entertain its reader!

In this alternative world, the Great War in Europe, or World War I as it is now dubbed, lasts only a few months, as the French do not halt the German army at the Battle of the Marne but are instead given a final defeat that leads to their surrender. Thereafter, the British Expeditionary Force attempts to fight its way to the Mediterranean coast and escape by sea, but they are cornered and brought to heel in southern France. A triumphant Germany then goes on to obliterating the armies of the Tsar of Russia, resulting in a peace treaty that leaves Germany as the supreme power on the European continent and gifts her with even more overseas colonies. The German Empire is now the preeminent power in the world and is supreme everywhere! Well, maybe not on the high seas, because the British Navy still rules there, but the German Navy will deal with the Brits soon enough.

At this point in time, the U.S. is in pretty pathetic shape. She never involved herself in the European conflict, and so her army and navy are almost non-existence. She has a pacifistic President in Woodrow Wilson, who has reduced the armed forces and sincerely believes that there will be no more wars and that peace will now reign eternally. And even when Germany involves itself in a revolution in Mexico and sends troops there, the United States still clings to its belief that the peace between herself and Germany will last forever.

Naturally, President Wilson and the other appeasers are dead wrong on the Kaiser’s intentions in North America. (I mean, otherwise, there would not be a book, right?) For the ruler of Germany is growing older and he is determined to leave to his heir a world dominated by Germany and without fear of any potential rivals, and the Kaiser clearly envisions that the United States – if awoken – has the hidden seed of a superpower within her pathetic breast. A power that could very well upset this new Pax Germanica. And the Kaiser is determined to stop this threat before it ever rears its ugly head!

The stage is set for a fun-filled alternative history tale!

And boy, does Mr. Conroy deliver.

You want political intrigue between nations? They are here.

You’d like to sit in on desperate military commanders trying to slow down an overwhelming attack? Come on in.

The horrible realities of civilians caught in a war? They are touched upon without being too realistic for this type of story.

Honestly, 1920: America’s Great War is a very accessible and readable story. Its characters – while generally one dimensional – are plausible, easy to root for or against, and compliment one another, while the historical world they inhabit is genuine enough that the tale never seems too “far-fetched.” Like all novels, however, I found a few things that I wish would have been handled better by the author, and I cannot help but list them – though I promise to be brief.

1) As many other reviewers have pointed out, Mr. Conroy takes many liberties with the historical facts of this time period. Certain equipment that play major roles in this story was not “invented” until later on in World War I, and since in this alternative world, WWI only lasted a few months, those aircraft, tanks, et cetera would not have even existed for use in a German-American War. Also, many of the armaments and fortifications that the U.S. did have in 1920 are omitted to make the U.S.’s position even more pathetic than it really ways. And Germany’s ability (financially/logistically) and its desire to wage a war half a world away in North America is doubtful at best.

2) Everyone in the novel basically talks like they are living around the corner from the author in twenty-first century America. Oh, there might be a few figures of speech from the early twentieth century, but overall, Mr. Conroy does not attempt to mimic the culture or speaking styles of this period of history. So if you are looking for a novel that has the “look” and “feel” of 1920’s America or Germany, this is not the book for you.

Other than these “historical” criticism, I found 1920: America’s Great War a fascinating novel and an excellent read. Mr. Conroy’s obvious love of history comes across in this story, and while he has altered the facts to his liking, he has done so to make the book more dramatic and circumstances more ominous, which is perfectly acceptable in this kind of novel. Give this one a try, it is highly recommended for alternative history buffs everywhere!