THE HORSE AND HIS BOY by C.S. LEWIS

Posted on October 7, 2013 by Bookwraiths 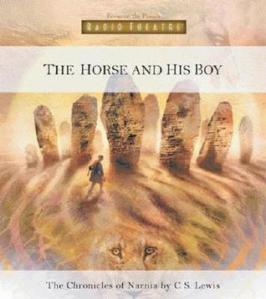 The Horse and His Boy, by CS Lewis, is a very different type of Narnian adventure than what most readers of the series have experienced, and it is perhaps better because of it.

The tale itself begins with a young boy, Shasta, who lives on the seacoast of the land of Calormene with his father, a poor fisherman. The two are far from happy, though Shasta tries to be the very best son his father could ever have wished for.

One day, a noble traveler stops by their humble dwelling for the night and offers to buy Shasta from the fisherman. And much to Shasta’s surprise, his father agrees to do so!

Filled with terror at the life of slavery his father intends to sell him into, Shasta decides to run away from home. Before he can even slip away from home, however, the young boy unexpectedly meets up with a Narnian horse named Bree, who is the nobleman’s mount and wishes to join him. After getting over the initial shock of a “talking” horse, the two throw their lots in with one another, determined to run all the way back to Bree’s homeland of Narnia, far away to the north.

Along the way, our companions are stalked by enraged lions. They meet and become friends with a smart and strong-willed girl, Aravis of Calormene, and her talking Narnian horse, Hwin. They journey across deserts and mountains before entering a far away land of forests and rivers. And, they even stumble upon and become acquainted with other surprise characters.

All in all, Shasta and Aravis’ journey is a fun-filled adventure!

1) A simple, yet entertaining, fantasy story. It is a classic tale where two, young people must grow up and reach their potential through a quest – this one being the land of Narnia, but even in its simplicity, the journey is very exciting and the entertaining.

2) The characters of all four companions: Shasta, Aravis, Bree and Hwin are well crafted in their different desires, fears, and expectations. Even the horses actually have their own personalities, which ring true to what you’d imagine a horse would actually act like.

3) The actors in this audio book performed very admirably to me, endowing each character with a unique sound and tone that made it easy to always understand who was speaking. Also, the sound effects were excellently done, giving each scene the correct mood and charging the exciting parts with just the right suspense or drama.

Not much really. I was pleasantly surprised how good this audio book was, and I know that shocks many of you.

It is well worth a listen!

Purchase the audio book at Amazon.