THE GATEWAY (HARBINGER OF DOOM) by GLENN G. THATER 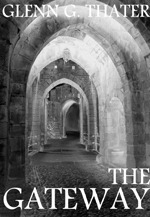 This Beowulf-inspired tale begins near the city of Dor Eotrus, which lays in a northern land that is more than a little Viking-esque. These northerners are fiercely independent, believing their more “civilized” neighbors are weak and pride themselves on their prowess in battle. So when a strange mist begins rolling outward from a mysterious, dark circle in the nearby forest, the old king, his fast friends and their trusted, war veterans sally forth to investigate the bloodcurdling shrieks which are emanating from it every night.

No matter these heroes confidence in their battle prowess however, what they find within the watery enbrace of the night is more than they were expecting. Indeed, the horrors which await them have not been seen by men for many ages of the world, and when it’s presence is made known, can even the king and his friends vaulted might with steel and magic save the world from its dark embrace?

Who can tell, because the mist covers all, hiding the fate of the king’s party from his people.

As the king fails to return, those left behind in Dor Eotrus worry as to his party’s fate. They do not realize yet what lies concealed by the mist, and even though they prepare for the worst, they each cling to the faint hope that perhaps their beloved king and his warriors still lie within the misty shroud, lost or fighting the evil that must reside therein. And it is this thought which spures the princes to sally forth to their father’s rescue.

Naturally, this is when our mysterious Beowulf-like warrior named Theta appears.

Lord Theta, and his squire Dolan, ride into Dor Eotrus as if on cue. Theta is a mighty man of war with ancient armor, weapons and wisdom encompsing both forbidden knowledge and magic. Dolan is an average warrior, but one who has followed his lord through many strange conflicts and seen many mysterious things, which have made him greater than he otherwise would have been.

Upon arrival at the mist besieged city, these two strangers are immediately taken into the confidence of the king’s son and his remaining advisors without any questions or doubts. Once ensconced there, Theta proves himself to be the strong and silent type, and though it is obvious that he knows what his new friends are about to face, he never warns them of their danger. Thus, the group heads into the mist and unto the dark circle in the woods with no one but Theta and perhaps Dolan understanding what is about to tranpire.

The story that follows is a good, old-fashioned monster bash, as our group of heroes follow the enigmatic Lord Theta into the magical vortex powering the mist. Swords are blooded, skulls are bashed, and Lord Theta never has to say much of anything.

This e-book (novella) is okay at best. However, it has significant problems.

One, the author spends chapters and chapters in the beginning updating a reader on the history of the land and the buildings in Dor Eotrus; none of which is at all relevant to the story. Two, once the true plot begins to take shape, it just sputters out toward the end. Boom! Lord Theta kills a bunch of monsters, story is over, and we are ready for the sequels.

2 Responses to THE GATEWAY (HARBINGER OF DOOM) by GLENN G. THATER