THE GUNSLINGER (THE DARK TOWER #1) by STEPHEN KING 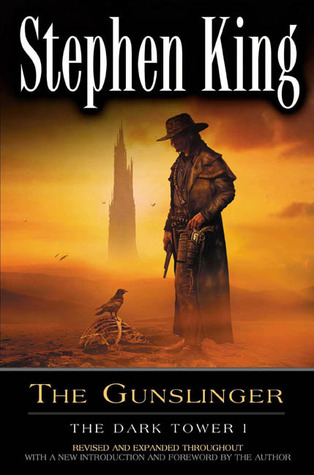 The Gunslinger is one of those books that evokes strong reactions in readers. You could simply say that people either love it or hate it but that is really too simplistic. Rather Stephen King evokes such a myriad range of different emotions with this science fiction/fantasy western that it is perfectly normal for an individual to feel both awed by its brilliance yet completely unhappy with its conclusion. I realize that is strange to say, but it is absolutely true.

What else is true is that no review will ever be able to tell a prospective readers whether they will adore or despise The Gunslinger – and The Dark Tower series that follows. Quite simply, the only way to know is to put on your cowboy boots and cowboy hat and accompany Roland Deschain out into the world that has “moved on.”

As a reader embarks upon the quest for the Dark Tower, he finds himself following along with Roland Deschain as “the gunslinger” crosses a strange post-apocalyptic “Old West” on the tail of his most hated enemy: “the man in black.” This villain was responsible for ensorcelling Roland’s mother, helping to kill Roland’s father, and had a hand in the destruction of everything that the gunslinger knew and loved in his world. So for years, our rugged, gun-toting hero has diligently pursued “the man in black”, determined to make him pay for what he has done, and now he is tantalizingly close to finally running his quarry to ground. Yet before the epic confrontation can happen, Roland finds himself confronting crazed citizens of a small town, meeting and loving a young boy, and ultimately dealing with the specters of his own haunted past.

After finishing this amazing story, I’m not ashamed to admit that I myself was one of those readers torn about my feelings for it. On one hand, I adored Roland and was desperate to learn more about his shadowy past, the why of his world’s strange condition (a place so familiar to our own yet obviously alien in that alternate time stream way), and what the Dark Tower actually was. However, on the other hand, when the tale was complete and the ending digested, all I felt was . . . a big so what!

Perhaps that sounds disrespectful of me. I know this is Mr. King’s masterpiece, but this novel — like the series that follows — is a flawed masterpiece. Filled with memorable characters and masterful stories yet missing the cohesiveness of other epic series like The Lord of the Rings. The sad truth is that The Gunslinger is a grand story that lacks a real ending, which, unfortunately, is a harbinger of things to come in The Dark Tower series as a whole.

With that being said, you probably wonder if I am discouraging people from setting off on this grand journey with Roland Deschain.

While The Gunslinger has its flaws (as does the series as a whole), there is no deny that it is an epic journey that whisks you away to another place with some of the most memorable characters in literature. And when you are done with it (Whether that be after one book or the whole series is entirely up to the individual.) it will be something you will always remember. Whether you recall it fondly or hatefully you will never know until you begin. So give this novel a try and decide for yourself if you’d like to follow the gunslinger all the way to the Dark Tower.