FUNDAY MONDAY, OR THE BOOKS THAT WILL HELP ME SURVIVE THE WEEK AHEAD (APRIL 23, 2018)

Another week begins.  I quickly slip into my business suit and head back into the office to save a few innocent people. While I try to fool myself into being excited about the promise of a new week and the continuation of the regular grind, deep down, I’m not, so I’m going to escape dreary reality by starting an epic fantasy while trying to finish up my latest Warhammer read!

The Wolf by Leo Carew

Series: Under the Northern Sky #1

Violence and death come to the land under the Northern Sky when two fierce races break their age-old fragile peace and start an all-out war in this thrilling and savagely visceral epic fantasy.
Ready or not, Roper has been thrust into a position of leadership that he’s woefully ill prepared for. Now, a massive army approaches from the south, old allies turn against him, and new rivals seek to undermine his rule. Facing attack from within and without, Roper must forge reckless alliances, no matter the cost, to save his kingdom.
Bellamus is a brash but capable southern general, a commoner with the rare honor of having the discreet support of the Queen. Rising quickly from the minor ranks he was born into, Bellamus leads the march on the North. Victory means glory, power, and the favor of the king, but defeat promises much worse than disgrace.
A tale of war, rivalry, and honor, The Wolf creates a world that is both familiar and uncanny – one where the fiercest enemies are always closer than they seem. 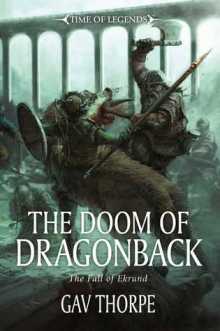 The Doom of Dragonback by Gav Thorpe

War with the elves has ended in bloody stalemate, great quakes have broken the peaks, and the enemies of the dwarfs are rising in vast numbers. Far removed from this grief, however, are the dwarfs of Ekrund, great underground city of the Dragonback Mountains, convinced that no foe will ever breach their walls. Amongst them, the Angbok clan continues to mine their gold, until war threatens Dragonback and decisions must be made that could change their way of life forever. Whether by exile or extinction, a great doom is coming…