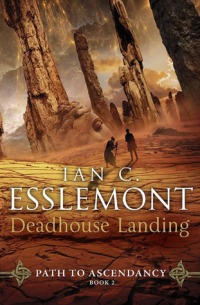 Deadhouse Landing is the second installment of Ian C. Esslemont’s Path to Ascendancy trilogy; this series set prior to the events in Steven Erikson’s The Malazan Book of the Fallen and Esslemont’s Malazan Empire.  Never having read any of the Malazan books before receiving a review copy of this novel from the publisher, I immediately procured a copy of Dancer’s Lament, dove right in, and found myself quickly immersed in a massive, beautifully complex world.

This book picks up directly after the events of Dancer’s Lament with Dancer the assassin and his mysterious companion Wu the mage finding themselves cast upon new shores and in a new city — Malaz City to be exact.  Wu quickly informs Dancer they will be continuing their plot for world domination, purchases a run-down bar in the worst part of town as their new base of operations, hires Napan refugees to run the place, then wanders off on a strange, personal quest to explore a long forgotten and dissolving realm of magic.  Dancer, of course, is thus left alone to make a string of head-scratching decisions which lead to less than satisfactory results.

For a Malazan noob like me, Dancer’s Lament and Deadhouse Landing were my first introduction to this world, these characters.  Not sure if that makes my experience with this novel better or worse, but I can truthfully say I went into the story with no expectations, having no idea what becomes of these characters in the future novels.  But this clean slate allowed me to learn about everyone introduced here, grow to like them for who they now are, and slowly grow fond of the sprawling world that they live in.  And it was this amazing introduction and the fact I felt I was truly beginning my journey at the beginning with these characters that was the best part of the novel for me personally.

The one element of the narrative I struggled with was the overwhelming number of point-of-view characters.  All these different people are introduced, cross paths with one another at one point or another, then exit off stage.  I’ve read that many of these individuals are characters of importance in the other Malazan books, which meant frequent readers already knew and had an attachment for them, but I personally struggled at times to keep all of them straight in my memory, not able to appreciate the name dropping and foreshadowing of future events.

Overall, I really enjoyed this novel, finding it a very interesting story with a number of approachable characters and a great introduction to the Malazan world.  I can’t say if long time Malazan fans will appreciate the book as much as I did, but if I had to hazard a guess, I would say they would enjoy it as well.