FUNDAY MONDAY, OR THE BOOKS THAT WILL HELP ME SURVIVE THE WEEK AHEAD (OCTOBER 30, 2017)

Here is what I’ll be reading! 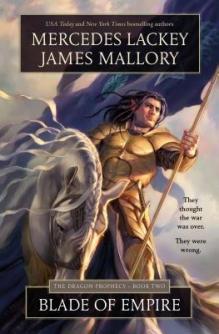 Set in a masterful fantasy world filled with elves and demons, unicorns and goblins, and mages and warriors, BLADE OF EMPIRE continues the legend of Vieliessar Farcarinon, the first High King.

As Vieliessar confronts the first waves of the forces of Darkness, her destined Bondmate, Runacar, leads a rag-tag group to war. For centuries, the Elves have hunted the Otherfolk minotaurs, gryphons, dryads, and more considering them beasts. But they have a complex society, Runacar discovers, and though he is an Elf, takes it as his mission to help them reclaim their lands from his former friends and allies.

The Dragon Prophecy is a tale of loyalty and betrayal, of love and loss, of sacrifice and salvation. And of the never-ending battle between Light and Dark.

The Nine by Tracy Townsend

In the dark streets of Corma exists a book that writes itself, a book that some would kill for…

Black market courier Rowena Downshire is just trying to pay her mother’s freedom from debtor’s prison when an urgent and unexpected delivery leads her face to face with a creature out of nightmares. Rowena escapes with her life, but the strange book she was ordered to deliver is stolen.

The Alchemist knows things few men have lived to tell about, and when Rowena shows up on his doorstep, frightened and empty-handed, he knows better than to turn her away. What he discovers leads him to ask for help from the last man he wants to see—the former mercenary, Anselm Meteron.

Across town, Reverend Phillip Chalmers awakes in a cell, bloodied and bruised, facing a creature twice his size. Translating the stolen book may be his only hope for survival; however, he soon realizes the book may be a fabled text written by the Creator Himself, tracking the nine human subjects of His Grand Experiment. In the wrong hands, it could mean the end of humanity.

Rowena and her companions become the target of conspirators who seek to use the book for their own ends. But how can this unlikely team be sure who the enemy is when they can barely trust each other? And what will happen when the book reveals a secret no human was meant to know?

1 Response to FUNDAY MONDAY, OR THE BOOKS THAT WILL HELP ME SURVIVE THE WEEK AHEAD (OCTOBER 30, 2017)