THE FIFTH EMPIRE OF MAN

Posted on October 7, 2017 by Bookwraiths 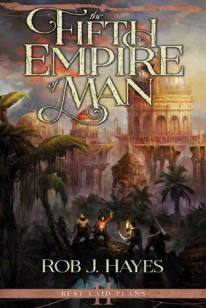 The Fifth Empire of Man by Rob J Hayes

The Fifth Empire of Man is the sequel to Rob J. Hayes grimdark pirate tale Where Loyalties Lie, and it continues the ferocious nautical adventures, dousing the pages with blood, battle, and cutthroat action!

Drake Morass is now the “king” of a fledgling pirate kingdom, but how long will it remain? With a a huge armada set to attack the new realm, survival seems a slim hope. But even this coming crisis pales in comparison with his most immediate problem, for, you see, Drake has made promises he can’t keep and probably never intended to keep, and now he has to keep a close eye on his “trusted” lieutenants since he knows it is only a matter of time before one turns on him.

Topping Drake’s list of potential traitors is Keelin Stillwater. This gentleman pirate (I’m stealing that description from C.T. Phipps, because – well, it was a damn good description.) views himself as a true leader, who attempts to be fair in his dealings and take care of those under him. His natural ability making him a key concern for Drake, because the pirate king knows if Keelin turns against him others will join his cause.

Nearly equal to Keelin atop the “watch list” is the pirate Elaina Black, who has been breed to be the most vicious pirate to ever sail the seas. She is cunning, nasty, and has the respect of those she commands. Hell, with her on again off again relationship with Keelin, she might also be able to prod him to turn or gain his help if she decided to take over. Both equally possible in Drake’s eyes.

What comes out of this delicate situation is tons of killing, loads of cutthroat intrigue, an intense nautical battle, and even some piratical romance. All of it told in a fast paced style, which keeps the surprises (Oh, there are lots of surprises. No character safe from brutal death!) coming at a blistering pace, as piratical mayhem rules all from first page to last.

But, alas, nothing is perfect, and neither is The Fifth Empire of Man – though the issues I’m going to raise might merely be my personal tastes rather than true deficiencies.

First, this was a much darker, bloody, and violent book than its predecessor. A fact which took me by surprise, since I felt Where Loyalties Lie was fairly grim. Don’t take this to mean I’m in any way suggesting these elements were handled inexpertly or were out of place in the narrative, because I’m not. I truly believe Mr. Hayes set out to craft a realistic portrayal of vicious pirates, and he did so in fine fashion, but at times the depth of the grimdark here did bother me.

Second, the fight scenes (especially the huge naval battle) were too difficult for me to follow. There was just so much going on that I got lost and had to go back and reread whole sections to keep everything straight in my head. Certainly, the sort of chaotic fighting and events portrayed were completely realistic and accurately captured the nature of a battle at sea, yet I wished it would have been a bit more focused.

Lastly, I found myself missing Drake. Yeah, he is a sociopath, a liar, a vile sack of shit, but he was pretty damn interesting to follow in book one. This time he played a lesser role in the story, and I felt that the book suffered a bit from a lack of Drake.

Overall, The Fifth Empire of Man is a very good conclusion to a grimdark pirate series. It is exciting, violent, bloody, and filled with nautical scum who would kill their own mother if it suited their needs. Fans of grimdark will probably love this duology best, but I feel comfortable recommending this book/series to everyone who has an interest in what real pirates looked and acted like, not those Hollywood fop versions most of us have seen far too many times.

3 Responses to THE FIFTH EMPIRE OF MAN