Superman. Batman. Wonder Woman. The Big Three icons of DC. Separate, they are fan favorites. Together, they should be the stuff of fanboy dreams. And while Trinity: Better Together isn’t a revolutionary book; it is actually an engaging read, not overwhelmingly action-packed, but still entertaining, especially if you enjoy more of a character driven plot.

It all starts off with Batman and Wonder Woman heading on over to the Kent’s farm to have a get-to-know-you-better dinner with the new Superman. This interaction some of the best parts of the story; Diana and Bruce naturally having to deal with the death of the NEW 52 Supes and trying to accept this other Earth interloper.

But every story has to feature a villain, and quickly, our trio is caught up in a plot by not one but two B List baddies. (I won’t mention them by name, because I always like to be surprised.) The plot soon immersing our heroes in their past, retelling to some extent the most important parts of their origin stories. What they learn about one another helping Supes, Bats, and Wonder Woman not only overcome this adversary but begin to empathize with each other.  Which is really what this whole story is about: understanding and friendship. 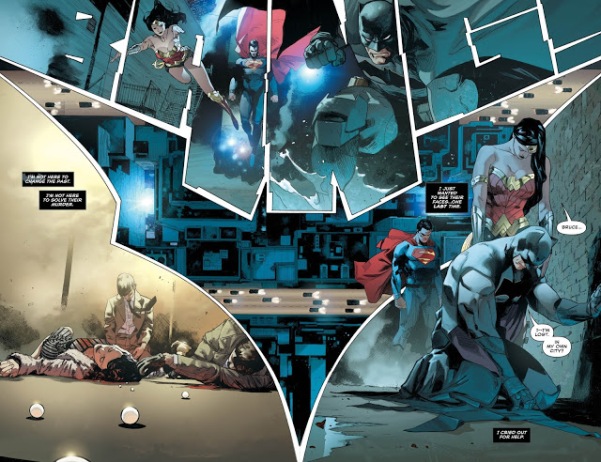 Overall, Trinity: Better Together is a nice book to lose yourself in for a bit. The story itself has some cool moments (especially our heroes initial awkward attempts to bond); and the focus on the characters themselves, their history, their differences, and what binds such different people together is handled really well. I have to admit being a bit letdown by the villains and their grand scheme, but I commend writer/artist Francis Manapul for doing something different, not settling for the tried-and-true huge fight scene after huge fight scene readers have seen far too many times.

As for the art, it is the real selling point of this collection. Manapul is an amazing artist. His distinct pencils, vibrant colors, and unique atmosphere raising this book up among the best of the Rebirth titles.

To sum up, I liked Trinity, especially the art. Sure, the story wasn’t everything I dreamed it to be, but it still had its highlights. And, yes, I would recommend people give it a read.

3 Responses to TRINITY: BETTER TOGETHER