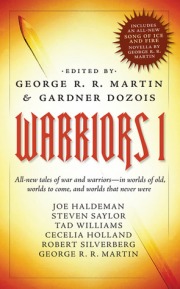 Warriors 1 is an anthology put together by George R.R. Martin and Gardner Dozois; these two masters of speculative fiction giving readers an amazing collection of stories to devour. This initial volume penned by authors such as Joe Haldeman, Tad Williams, Robert Silverberg, and Martin himself. But for all its recognizable names, the book was an up-and-down affair for me with exactly two stories rising to the level of 4 stars, and, sadly, these were more along the lines of entertaining time wasters rather than gripping page turners or serious thought-provoking affairs. As for the rest of the novellas, they ran the gamut from It-Is-Decent to I-Had-To-Make-Myself-Finish-It.

Beginning with the best of the bunch, Martin’s “The Mystery Knight” might not be Dunk and Egg’s best adventure, but it is still a Westeros story, which made me happy, as I keep up the vigil for the next ASOIF novel to finally arrive.

“Defenders of the Frontier” by Silverberg wasn’t a story I got instantly excited about reading. Its premise of a band of frontier soldiers forgotten after a war ends and unsure what to do next not exactly what I expected out of an anthology about warriors.  Honestly, I viewed it as the most likely story to bore me to tears.  I shouldn’t have doubted the author however, because somehow, someway, Silverberg drew me into this world, made me feel real empathy for this band of brothers and their dilemma, and I quickly found myself enjoying this unique look at a very different sort of “warrior” problem, specifically whether to go home after your war ends.

“The Eagle and The Rabbit” by Steven Saylor was quite the historical ride. As a lover of history (especially ancient history), I always love to be transported back to Roman times, and this tale of slaves being physically and emotionally tortured by their Roman captors both jarred my psyche and spiritually uplifted me.

The next best of the bunch was probably Tad Williams contribution “And Ministers of Grace.” This quick morsel focusing on an interstellar assassin/terrorist with obsessive religious convictions. I thought the scifi world was well thought out, the tech was interesting, and our protagonists’ deep emotions very realistic. Only problem was the ending, which just didn’t live up to my expectations after the great start.

Joe Haldeman is one of the masters of military science fiction, so it should come as no surprise that “Forever Bound” focused on a young man drafted into the military of the near future and assigned to control avatar-like killing machines. The concept sounded interesting and very relevant to today’s world (considering the huge use and advancement in drone technology), but for whatever reason, the actual story didn’t deliver much emotional impact for me.

Rounding out the list is Holland’s “The King of Norway.” It has Vikings, war, and everything else which I usually adore, but for some reason it did not capture my attention. Perhaps others will find it more to their liking.

I’m glad I picked up Warriors 1; it was an entertaining anthology, which did a great job of presenting different types of stories which complemented one another yet still felt uniquely different. Unfortunately, not enough of these tales captured my imagination. I’ll definitely be picking up part two, but I hope it is much better than this one.