AVENGERS OF THE MOON 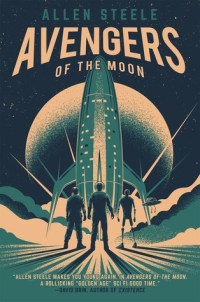 Avengers of the Moon by Allen Steele

Modern pulp. Retro scifi. Label Avengers of the Moon whatever you want, but Allen Steele has accomplished something amazing with this novel: resurrect Captain Future and set him up for a return to greatness!

Who is Captain Future, you ask?

Well, the original pulp series was created by Mort Weisinger and mainly written by Edmond Hamilton, lasting from 1940 to 1951. The hero, Curt Newton, a brilliant scientist who – along with his faithful side-kicks – righted wrongs, defeated vile villains, and kept the inhabited planets in our Solar System safe from evil. But these days Captain Future is probably best known as the guy whose poster is on the wall in the Big Bang Theory apartment. 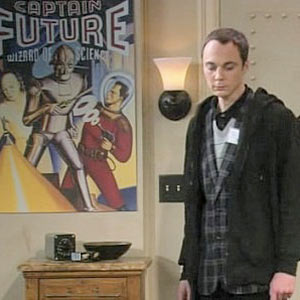 Naturally, Allen Steele’s revamp of this classic character begins with a new origin story. Here Curt Newton is a child whose mother and father are murdered. A robot, an android, and the disembodied brain of Professor Simon Wright, a good friend of his parents, rearing him thereafter and keeping him safe in an underground bunker on the moon.

Fast forward a couple of decades. Curt discovers that his parents’ killer is corrupt businessman and Lunar Senator Victor Corvo. To obtain justice, Curt creates the Captain Future persona and along with his guardians (the already mentioned robot, android, and disembodied brain), as well as competent but beautiful Inspector Joan Randall of the Interplanetary Police Force, sets out to bring this corrupt politician down. But nothing is as simple as it seems, and soon Captain Future uncovers a far larger conspiracy, one which puts his desire for personal justice (or revenge) on the back burner.

Combining all the fun and excitement of Golden Age sci-fi pulp with today’s science facts and modern sensibilities is a tough task for any author to take on. Thankfully, Allen Steele was up to the challenge.  His new Captain Future centered in a more realistic solar system with a more socially acceptable persona, surrounded by updated side-kicks, villains, and female characters, yet able to retain the naive excitement, amazing gadgets and roller coaster action of the original. Avengers perfectly managing the precarious balancing act of satisfying both old school and new age readers, providing all of them a rip roaring ride into the future of science fiction pulp!

For the type of retro sci-fi pulp that it was, I felt Avengers had no real deficits. Obviously, the writing had an intentional pulp feel to it and a few story elements were a bit silly or more young adult oriented than I personally would have liked, but, overall, Allen Steele created an entertaining story in the mold of the original Captain Future. However, if I’m being perfectly fair, I can see where some readers will be bothered by the portrayal of the female characters here. While updated from the original material, none of them are in positions of power, and they are all noted as being attractive more than a few times. I didn’t find any of this to be intentional or sexist in any way, but I felt it only fair I mention this fact.

Whatever criticisms can be leveled at Avengers of the Moon, everyone should be able to agree Allen Steele has done a wonderful job rebooting Captain Future. From outdated pulp hero of old to a modern sci-fi pulp star, this scientist and his sidekicks will delight any admirers of Golden Age science fiction or lovers of fast-paced, pulp inspired stories. Nope, Avengers isn’t a serious, deep science fiction saga, but it isn’t meant to be. Rather, it is exactly what Allen Steele dreamed it would be: FUN!

3 Responses to AVENGERS OF THE MOON