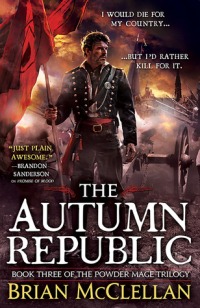 The Autumn Republic by Brian McClellan

Brian McClellan fans! Powder mage lovers–
And everyone else here who is searching for the next great fantasy series to read:
Today, today, you must fall to your knees in thanksgiving.
Bow your head in joyful celebration.
For I have the pride, the privilege, nay, the pleasure
Of announcing before all my fellow bibliophiles that The Autumn Republic is splendid.
Nay, far more than that: spectacular.
A finale which amazes, excites, and, more importantly, leaves nary a dangling plot thread!

When my trembling hands picked up The Autumn Republic,
My desires were that of a simple reader.
I wished to see if Field Marshall Tamas could win his war,
Find a way to defeat not only the Kez but an enraged god.

Next, I craved to read more about my favorite powder mage: Taniel Two-Shot;
Learn more about the mysterious and intense Ka-Poel.
These partners waxing large in my thoughts
As their part in the saga grew by leaps and bounds.

And all those other character, the non-powder mages,
I was concerned for them as well.
Desperate to know would they survive this struggle,
Find peace and, perhaps, a small glimmer of happiness.

These were the hopes, nay, the dreams of my simple mind.
Desires shared by everyone of you fellow Powder Mage lovers.
And this novel fulfilled them all.
Left me spent after a dash for destiny.
And, so, without any more ado,
I give to you the Fiery Finale,
The Begetter of Brilliance,
The Deliverer of Divine Decree,
The One –
The Only –
The Autumn Republic!

Continuing immediately after the events of The Crimson Campaign, Field Marshall Tamas has fought through to his beloved Adro only to find the entire country in turmoil. In the south, the war against the Kez goes poorly; the Adro army divided and close to all out civil war.  And, in the capital, the city has fallen to a foreign invader posing as its savior.

To make matters even worse, Tamas’ allies are few: his friends indistinguishable from his enemies. With his son Taniel Two-Shot missing and presumed dead, his only reinforcements weeks away, Tamas must desperately find a way to keep his revolution from absolute destruction!

From this beginning, Brian McClellan uses his now familiar pattern of shifting back and forth between multiple point-of-view characters to tell a fast-paced, excited, and well-rounded story here, one that focuses on all the returning characters, filling in more details about all our favorites and bringing closure to their tales – at least for the moment. Even an old dog like Tamas learns some new tricks in this narrative, seeming to gain insight into life and his relationships with those around him. And McClellan develops these characters without bogging down the narrative in endless details or collapsing it under constant descriptions of insignificant items. Rather, he spends his time exploring and transforming Tamas, Taniel, Adamant, Bo, Nila, and all the rest by subtle introspection, careful conversations, while still delivering blistering battle sequences, action-packed combat, mesmerizing reveals, and concluding it all in final scenes that are painful yet satisfying, harsh yet so very true to the spirit of this tale.

Did I mention those battle scenes? They are among the best I’ve ever read. Brian McClellan able to put a reader down in the line with the Adran soldiers, allow them to experience a running fight with an enraged Privileged, and share the limb freezing terror of facing down an enraged god. They are intense affairs; realistic but not graphic, bloody but not gory. McClellan doing an outstanding job with this aspect of the story.

My only complaint (because, we all know I always have one) is the way McClellan wraps up the Adro Revolution tale. Perhaps it is because I’m a history lover, or maybe it is because of the obvious comparisons between the French Revolution and the Adro Revolution, but I felt this earth shattering event was put to bed too quickly. In reality, the French Revolution caused decades of turmoil and war in Europe; the nobility of the surrounding countries not terribly accepting of this new upstart whose ideas could cause revolutionary zeal to take hold everywhere and destroy even more monarchies. And so I found it a little difficult to accept the way this book ended in that regard. Nope, it didn’t ruin the fun for me, but I had to slap my cynical self a few times to keep him from disrupting my immersion in the story.

The Autumn Republic was a fitting and stunning conclusion to what has become one of my favorite fantasy series, as well as cementing Brian McClellan a place among my favorite fantasy authors. Without a doubt, the whole Powder Mage Trilogy is amazingly original, improved in one way or another every installment, and has turned me into a dedicated fan of flintlock fantasy. The many short stories and novellas the author has published just adding to my expectations for where he will go with this world in the future. And so it should come as no surprise that I recommend . . . nay, I DEMAND (very politely, of course) that you go out and purchase Promise of Blood so you can join in the fun, because if you are a fantasy lover this trilogy is one you cannot miss.

8 Responses to THE AUTUMN REPUBLIC