THE CHRONICLE OF HELOISE & GRIMPLE 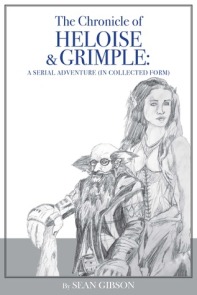 A short, quirky story originally published online as a chose-your-own-adventure serial The Chronicle of Heloise & Grimple is a return to a simpler side of fantasy, where the whole point of the trip was to have fun.  And if a reader opens up Chronicles with that single-minded pursuit in mind, they will find themselves completely entertained.

The leaders of our twisting, turning, and rather ridiculous (at times) adventures is Heloise, her comaapnion Grimple, and a hedge wizard named Kevil they pick up along the way.  All of these guys caught up in a quest to remove a curse from Grimple; this hill giant having pissed off the wrong sort of wizard and now living his life as a sickly gnome.  But, naturally, turning old Grimple back into his normal self isn’t easy, and the trio bumble into one hilarious encounter after another, as they slowly trudge along the path to quest completion.

Since Sean Gibson himself admits “[t]he Chronicle is intended to be both homage to and satire of the fantasy stories and games” he grew up reading and playing, it should come as no surprise that this story is all about poking fun at fantasy tropes and getting the most laughs out of the absurdity of it all.  Which means there is no angst here.  Grimness is not allowed.  Realism is scoffed at.  Darkness be gone!  Hell, serious of any sort is frowned upon.  Instead, wittiness, silliness, and humor are the rule by Jove.

But does it work, you ask?

Yes.  For the most part.  Chronicle is truly a delightfully funny adventure story fully of outrageous laughs and ridiculous encounters.  Monty Pythin-esque if you will.  And if that is something which you enjoy, you should pick this book up and give it a try.

As for criticisms, I really don’t feel a need to point out minor problems I had with the narrative.  Sean Gibson promised fantasy humor and outrageous fun with Chronicle, and that is exactly what he delivers, so why be nitpicky.

Overall, The Chronicle of Heloise & Grimple is a fast-paced, rollicking adventure big on silliness and lighthearted laughs at fantasy tropes expense, filled with action, and even including pictures (All great books have illustrations, you know).  What that all means is if your looking for some fun in your fantasy, then Chronicle might be the first stop on your quest.

I received an advanced reading copy of this book from the author in exchange for a fair and honest review. I’d like to thank him for allowing me to receive this review copy and inform everyone that the review you have read is my opinion alone.