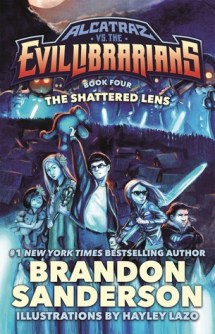 The Shattered Lens by Brandon Sanderson

My youngest son and I have been enjoying the Alcatraz series for several months now.  Brandon Sanderson’s funny, bizarre, clever, and hilarious writing definitely takes some getting use to (I mean, the Evil Libraries are reading these stories after all, so Alcatraz has to confuse them.), but once you begin to acclimate yourself to the strangeness of the Free Kingdoms and the whackiness of the Smedrys the middle grade fun takes off.  The author has even been kind enough to include another one of his creative magical systems and a serious undertone to the tale to satisfy more demanding readers: young and old alike.  And the best part is The Shattered Lens sets everything up for the titanic conclusion to the series next book!

As we begin, Alcatraz can’t seem to catch his breath before the Evil Librarians unleash yet another diabolical scheme to take over the Free Kingdoms.  After having foiled their foul plots for three straight books, you’d think the bad guys would have learned their lesson by now.  I mean, Alcatraz Smedry has come home and they need to stop the foolishness already.  But, no, the librarians move from defeat into full attack mode in The Shattered Lens.  Their new target the Free Kingdom of Mokia, where they besiege its capital of Tuki Tuki.  All of which means Alcatraz must once again use his extraordinary Smedry talent of breaking things (along with an unlimited supply of exploding teddy bears) to stop the vile villains in their tracks.

Like always, Alcatraz sets off without any real plan.  Okay, he sorta has a plan.  I mean, charging into battle with only his friend Bastille to help is kind of a strategy, right?  The other Free Kingdoms will eventually come and help once they see Alcatraz taking a stand.  They have to, don’t they?  And, they will show up in time to stop the librarians’ coma-inducing weapon from taking out all of Tuki Tuki’s defenders, hopefully.  Sure, the robot army of the Evil Librarians is impressive, scary powerful even, but Alcatraz knows it will all work out in the end, because . . . it always does.

As a middle grade book filled with whacky humor, it probably goes without saying that the jokes are the star here.  Now, as a dad, I can’t say I laughed out loud at every one-liner or smiled at every silliness which Brandon Sanderson effortlessly penned, but my nine year old did.  Every zany line, every ridiculous event amused him, entertained him, and thrilled him.  And since my son is more the target audience for this mad caper than, I think Mr. Sanderson succeeded in doing exactly what he set to do: entertain the middle grade readers.

Don’t take the above statement to me I didn’t enjoy this book, because I did.  It is just that different things held my attention.  My personal favorite being the continued growth of the magical system, as here (and throughout the entire series) Mr. Sanderson has every so subtly unveiled oculatory lens, Smedry talents, the Incarnate Wheel, and so much more; the comical nature of each “magic” hiding yet developing an intricate and complex system which is very reminiscent of the magical systems from his “adult” epic fantasy series.  The Alcatraz system yet another one of Sanderson’s magical masterpieces, which is well worth learning about.

As for any criticisms of this novel, I do not have any besides what I have already mentioned in my reviews of the three prior books, specifically you like Sanderson’s sense of humor here or you don’t.  Obviously, if pushed to say more, I will admit the whacky, over-the-top fun was a bit much for me at times.  And, sure, the more serious plot points took a backseat to the laughs.  But please remember this is a middle grade book where comedy is king, so while those things did bother me, I do not hold that against The Shattered Lens in the least.

But it all comes down to whether you should read this book and this series, doesn’t it?

My only answer to such a question is that Alcatraz is a series you either like or you don’t.  My son and I do like it.  He gets all the jokes.  I get most of them.  He relates to Alcatraz.  My nine year old self thinks Alcatraz is pretty cool.  The magic system here makes my son laugh.  The magic system makes me realize how smart Brandon Sanderson really is.  The Shattered Lens‘ conclusion excited my son.  The conclusion made me anxious to see how Mr. Sanderson can wrap this story up in The Dark Talent (set to be released September 6, 2016).  And so that is why I would encourage all fantasy lovers to give this one a try, because your inner child needs to be released occasionally to have some fun.

3 Responses to THE SHATTERED LENS