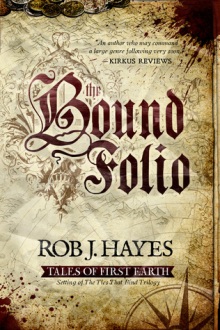 The Bound Folio returns (or introduces) readers to Rob J. Hayes’ First Earth fantasy world, and like his first trilogy, The Ties That Bind, this collection of short stories is not for the faint of heart.  Rather, these tales are grimdark to the core, filled with execution, rape, revenge, cynicism, and brutality.

To my mind, all the stories in this collection fit into two very nice categories: the unexpected twist and the shock-fest.  The former generally consisting of a straight ahead narrative which concludes in a surprising way, while the latter is all about the death, mayhem, and gore.  “The Night Blade”, “The Battle of Underbridge”, “The Twins”, and “The Mistress of the West” are the examples of what I consider twist stories.  “The Sword of the North”, “The Kid”, “The Merchant of Truridge”, and “Beck” are the tales which felt like shock-fests to me.  None of these shorts are connected in any way, other than they take place in the same world as The Ties That Bind trilogy and showcase some of the characters which appear therein.

What Folio does extremely well is deliver a heaping dose of bloody, brutal grimdark for fans of the genre.  The scenes of children burning at the stake, men being fed their best friend, husbands watching their wives gang raped and killed, and all the other memorable moments favorably compares to the most hardcore grimdark out there, so those who love that type of dark and gloomy fantasy should be pleased beyond belief.

The main problem I had with the collection was more than a few of the stories seemed rather pointless.  There would be a lot of buildup, a great deal of foreshadowing of big events to come, but then the story would end abruptly.  Usually, the narrative would be wrapped up by a few brief sentences or a couple of concise paragraphs, which did not really deliver the exciting ending which I personally had been anticipating.

Not being a true follower of Rob J. Hayes, I picked up The Bound Folio to experience more of his grimdark world and his storytelling style.  Both things this collection certainly showed me.  After reflecting on my time with these stories, I’ve actually discovered that even as a grimdark fan I still have a level of utter despair that I’d rather not sink to.  As ashamed as I am to admit it, I still prefer to have a little bit of light in all my grimdark-ness to keep me motivated to continue reading, and Rob J. Hayes world was a little too realistic and a little too harsh for my tastes, though others might find it to their liking.

4 Responses to THE BOUND FOLIO