Now, I can’t say I’m completely finished with last weeks books, so I’ll be spending time with Mark Lawrence’s The Liar’s Key, but I’ll also be beginning two novels I and my son have been anxiously awaiting. 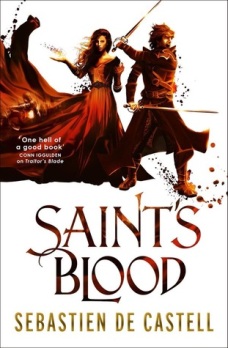 How do you kill a Saint?

Falcio, Kest, and Brasti are about to find out, because someone has figured out a way to do it and they’ve started with a friend.

The Dukes were already looking for ways out of their agreement to put Aline on the throne, but with the Saints turning up dead, rumours are spreading that the Gods themselves oppose her ascension. Now churches are looking to protect themselves by bringing back the military orders of religious soldiers, assassins, and (especially) Inquisitors – a move that could turn the country into a theocracy. The only way Falcio can put a stop to it is by finding the murderer. He has only one clue: a terrifying iron mask which makes the Saints vulnerable by driving them mad. But even if he can find the killer, he’ll still have to face him in battle.

And that may be a duel that no swordsman, no matter how skilled, can hope to win. 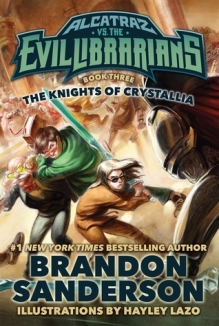 The Knights of Crystallia by Brandon Sanderson

The Knights of Crystallia is the third action-packed fantasy adventure in the Alcatraz vs. the Evil Librarians series for young readers by the #1 New York Times bestselling author Brandon Sanderson. These fast-paced and funny novels are now available in deluxe hardcover editions illustrated by Hayley Lazo.

In this third Alcatraz adventure, Alcatraz Smedry has made it to the Free Kingdoms at last. Unfortunately, so have the evil Librarians–including his mother! Now Alcatraz has to find a traitor among the Knights of Crystallia, make up with his estranged father, and save one of the last bastions of the Free Kingdoms from the Evil Librarians.

4 Responses to FUN DAY MONDAY, OR THE BOOKS THAT WILL HELP ME SURVIVE THE WEEK AHEAD (MAY 2, 2016)