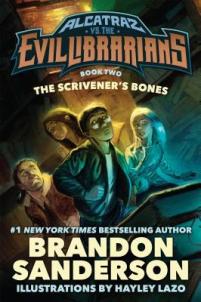 The Scrivener’s Bones by Brandon Sanderson

After thoroughly enjoying our first adventure with Alcatraz, my youngest son and I quickly began the sequel; both of us having become fans of this quirky, fun series.

In The Scrivener’s Bones, our hero and friends find themselves with a new mission: infiltrating another library.  (Well, if one is fighting evil librarians, they are usual found in libraries, right?) But this time they are heading to the most famous one (arguably) in the history of the world — the Library of Alexandria.

Yeah, you read that right.  The great library of the ancient world which was supposedly destroyed around 270 AD by Roman Emperor Aurelian.  But it still exists you see.  Its vast tomes of knowledge weren’t burned at all.  The legend is yet another monstrous lie of the evil librarians, who actually stole the library and hide it in a deep underground vault.  A place of pure evil where undead curators guard the ancient lore; their souls exchanged in return for the opportunity to access the hidden Alexandria collection.  And Alcatraz and friends have to brave the horrors to rescue Grandpa Smedry; the endearing fellow having gone and gotten himself captured!

The story which develops from here is classic fun in the Sanderson style.  Sure, it is targeted for the younger audience of the Middle Grades, but anyone who loves this author will undoubtable enjoy it, for it has the trademark elements of all Brandon Sanderson books.

First, there are the amazing magic systems, which were introduced in Alcatraz versus the Evil Librarians, but are expanded upon and beginning to form into a silly yet complex structure in this installment.  The magical talents of the Smedry family are especially important to the narrative, so they get lots of page time, but oculatory lenses and silimatic technology are also touched upon.  All of them quirky, imaginative, and, at times, down right silly; each explained as only Sanderson can; the magic becoming just as much a distinguishing characteristic of the Alcatraz series as the title character himself.

As for our hero’s personal story, it continues to organically develop, not only his immediate adventure but the foreshadowing of future events and the unveiling of unknown history and family secrets.  All of it setting up the future very nicely, making it impossible for a lover of Alcatraz not to be dying to get their hands on the next book to see where Mr. Sanderson is heading.

What sets the series apart from other Middle Grade books, though, is our hero’s sense of humor (or Mr. Sanderson’s if you’d prefer.)  Alcatraz constantly interrupting the narrative to add sarcastic remarks, bizarre references, or eccentric asides.  His self-deprecating manner adding many a funny moment, even at the author’s own expense, as when Alcatraz advises his readers to hit themselves in the head with “one of Brandon Sanderson’s fantasy novels.  They’re big enough, and goodness knows that’s really the only useful thing to do with them.”

The Scrivener’s Bones is a great continuation of the Alcatraz series.  Obviously, it isn’t for everyone (The Middle Grade tone and the quirky humor might turn some off), but if you (like me) are a big kid at heart or intend to share this with a special kid in your life (My son and I read it as a bedtime story.) then it is a Brandon Sanderson story not to be missed, one which will have you smiling and chuckling more than a little.  But just be warned, Alcatraz has no sympathy on those readers who commit that “most putrid and unholy thing any reader can do.”  So no peaking at the ending, okay?

I received this book from the Starscape Books in exchange for a fair and honest review. I’d like to thank the publishers for allowing me to receive this review copy and inform everyone that the review you have read is my opinion alone.

1 Response to THE SCRIVENER’S BONES