Posted on December 3, 2015 by Bookwraiths

With the Origin story out of the way, the creative team finally gets to spread its wings and put this team into action.  “How did it go,” you ask.  Really well, I thought.

First off, the art by Jim Lee and others is stellar from beginning to end.  I could spend several paragraphs to sound smart by talking about color, character movement, and expressiveness in the dialogue section, but I’ll just say the art kicked ass and leave it at that.

As for the story, it was a fairly straightforward affair, but really entertaining.

Here, a former admirer of the Justice League has experienced personal tragedy and turned into a world-class hater.  Naturally, this causes him to try to ruin their public personas in numerous ways, resulting in numerous fights and other cool stuff like that.

Okay, okay, I know that sounds like pretty standard superhero storytelling, and it is, but Geoff Johns livens it up with the villain’s past, his personal suffering, and his very understandable reasons for doing what he does.  I’m not saying his sins are completely justified, but at least, they are understandable and grounded in his life story.  Things which make the story more interesting to me. 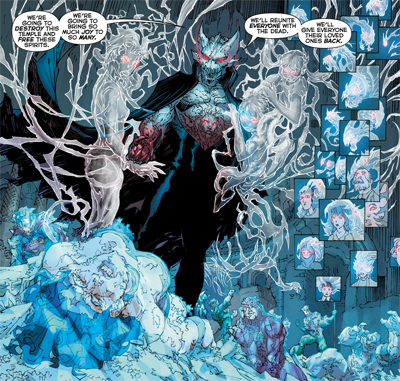 The other great element in this story was the Leaguers’ internal dynamics and their individual plots.  Green Lantern and Flash’s are still immature frat boys most of the time, but at least, they are actually funny this go round.  Superman continues to be aloof and standoffish, but I guess, in the New 52, that is who Supes is.  Cyborg’s story about whether he is even alive anymore or merely a machine raised some intriguing questions.  Aquaman continues to be the born leader, who is waiting for a chance to show everyone else he has what it takes to fix all the world’s problems.  Wonder Woman is a lot better than Volume 1, where her portrayal was god-awful, but there are still moments where you wonder if Johns gets Diana at all.  And Batman . . . well, he is Batman.  Hell, is there anything else that needs to be said, really.

The highlights of this collection really boil down to two plots for me personally.

First, I loved Green Lantern’s appearance.  I thought it was hilarious how Johns poked fun at old Ollie and his archaic bow and arrows, even going so far as to have Green Lantern totally give the guy a hard time every second of the way.  Classic stuff.

Second, the Wonder Woman-Steve Trevor sub-plot was a nice addition to the story.  I know, some people might think it was some silly crap and not in line with Diana’ characterization in Azzarello’s WW run, but I thought it was decently done, humanized the Amazonian princess a bit, and added another layer to the plot line.

So, overall, I really enjoyed this volume of the New 52 Justice League.  Great art.  Fun story.  Some killer fights.  Can’t wait to read the next volume, which is even now waiting for me at my local library.