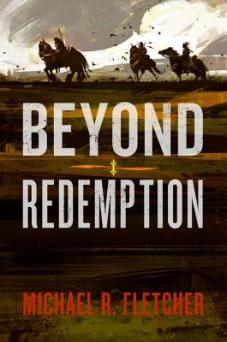 Exquisite mayhem and madness, Beyond Redemption is a novel which appears once every few years; a harbinger of things to come that takes the familiar fantasy tropes and twists them into something fresh and original. Like Joe Abercrombie’s The First Law or Mark Lawrence’s Broken Empire, Mr. Fletcher has now become a trailblazer, breaking away from the traditional path of epic fantasy as he crafts a world full of grimdark characters, delicious madness, and stunning magic. A new path which future grimdark novels will be forced to follow, because Beyond Redemption has just made grimdark even grimmer.

The descent into magical madness begins right from the first page.

The old gods were broken by wars and plagues of the mind, left reeling like the most bloodied veterans. Infected with horror at the cost of their actions, they retreated into dementia … Seeking to free themselves, they fled to a world of delusion, a world uncorrupted by jealousies and psychoses. And yet, in the end, even this they would pollute.

From this ominous setup, Mr. Fletcher introduces a land where reality is literally created by the madness and delusion of gifted (or insane, you have to decide) people. This insanity coming in many, many forms. There are Geisteskranken, whose psychoses actually transform the world around them; their madness becoming reality for normal people. Hassebrands are pyromaniacs, burning people to ash when their control slips. Kleptics can steal from anyone, no matter how vigilant they protect themselves. Cotardist become near indestructible assassins, as they already believe they are dead, so they are impossible to kill. Doppelgangist create duplicates of themselves, who then go out to act independently of their creators. Then there are the Gefahrgeists, who are sociopaths, gaining strength from those that worship them. And so many more.

Naturally, the world where these crazed magicians create their warped versions of reality is a dark place to live. Abandoned by the gods, left to delude themselves into creating whatever world they wish, the inhabitants of this land are in a perpetual flux of being; the nature of the world constantly shifting as mad magicians rise in power or eventually lose themselves in their own delusions, causing all their work to crash down around them.

If only there was a way to stop the perpetual evolution of reality? Control it somehow. Then an eternal paradise could be created for humanity.

Oh, but there is a way. At least Konig Furimmer, an immensely powerful Geisteskranken, believes there is. All he has to do is create his own god; one who will serve him and rescue him from the inevitable madness of using his powers. Then the Geborene Damonen religion Konig has created can spread across the world and bring peace and prosperity to everyone.

Only one problem with Konig’s plan. First, he has to create a being so perfect, so pliable, and so trusting that when it is his time to die (Gods can only become gods by being killed and ascending to their godhood in this world.) he will willingly go to the sacrificial altar. Second, Konig has to be the one who kills him, because only by slaying him can he force this risen god to obey him.

Brilliant plan. Unfortunately, there are always unexpected hurdles to overcome in any situation. Konig’s problem turns out to be something so simple he overlooked the possibility of it arising: outsiders.

Just when everything seems to be ready for Konig to create his god, a trio of drifters led by Bedeckt arrive in the land. This aged warrior is as sane as they come, troubling so; he is also a desperate man, who is looking for one last big score to set him up for retirement. Following him are his very untrustworthy companions: Wichtig, the “Greatest Swordsman in the World” and Stehlen, a Kleptic who will steal your shite and cut your throat before you even know it is occurring. When these three ride in and hear that a god is about to be created, Bedeckt immediately recognizes a way to end all his financial worries forever!

The tale that follows is grimdark at its grimmest and darkest. Nearly every character is vile beyond imagining. Insanity permeates every facet of the story. Mindless violence and very deliberate torture are present everywhere. People fight; people enslave others; and some people live in their own magically created hells. Decent people do atrocious things. Some really insane people do decent things. Plus, nothing is as it seems, because this whole place – the buildings, the farms, the people, everything – is a delusion of the criminally insane after all.

All in all, Beyond Redemption doesn’t sound like the type of story which I usually enjoy, but I did like it – immensely, in fact. Mr. Fletcher does such an amazing job crafting this morbid tale that I couldn’t stop turning the pages. His writing style effortlessly balancing between detailed and fast paced, somehow capturing the depth of the delusions, presenting the appalling dark side of worldwide insanity, and yet constantly convincing me to follow him down the path of madness to its inevitable conclusion.

Wildly imaginative, addictively entertaining, and morbidly dark, Beyond Redemption is a grimdark fantasy that more people should give a try. I know, madness can be intimidating, but once you get a taste of Mr. Fletcher’s fantasy version, you will see just how delicious it really is.

10 Responses to BEYOND REDEMPTION