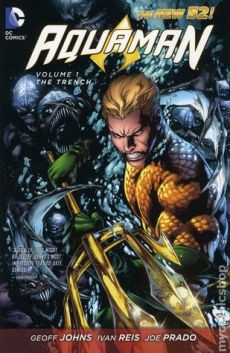 Aquaman: The Trench by Geoff Johns

My favorite New 52 character is — Aquaman?

God, I have a hard time admitting it. The words sticking in my throat like a tiny fishbone. Like so many others, I’ve always looked at Aquaman as that ridiculous dude from the old “Super Friends” cartoon; the one who wore a green and orange costume, talked to fish, and was basically a walking joke. But he isn’t that guy anymore. Oh, he has the same powers, wears the same colors, but now he has been transformed into a kickass superhero.

Johns begins this revamping with Arthur Curry (Aquaman’s real name) living with his girlfriend Mera (Don’t call her Aquawoman) in Amnesty Bay, USA, where he grew up with his (now deceased) father.  Naturally, Arthur doesn’t get any respect from the very people he is trying to protect.  Everyone making jokes at his expense, including ordinary bad guys.

Why Arthur is spending his time catching crooks, living in a lighthouse instead of sitting upon the throne of Atlantis, we don’t discover in this volume, but Johns does hint that future story lines will focus on the “whys” of Aquaman’s situation.  What is focused on are these cool sea monsters from an Atlantic Ocean trench, who begin emerging from the sea to abduct all the humans they can carry, taking them down to the depths to feed to their queen.  Naturally, Arthur and Mera must come to the rescue!

There is just so much to gush about with “The Trench.” Johns has crafted a story which makes everything that was stupid about Aquaman cool. All his apparent weaknesses are now his greatest strengths. Each of the ridiculous story elements are now unique twists. And Ivan Reis and Joe Prado have lovingly brought Johns’ story to life with vivid, dynamic art which captures the strength of this often forgotten superhero.

I just love this New 52 Aquaman. Never, ever in a million years would I have believed this was possible, but then again, miracles do happen. Pick this comic series up and discover the new, badass Aquaman; you won’t regret it, because the hype is real this time. 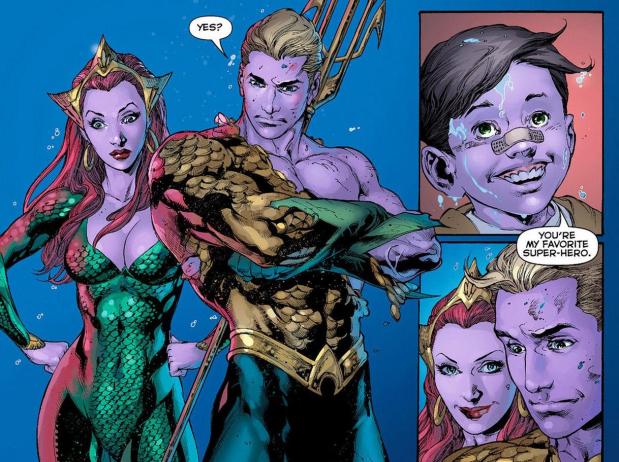 This entry was posted in 5 Stars, Graphic Novels and tagged Aquaman, DC Comics, Geoff Johns, The New 52, The Trench. Bookmark the permalink.

6 Responses to AQUAMAN: THE TRENCH