READY PLAYER ONE by ERNEST CLINE

Ready Player One by Ernest Cline

I came into Ready Player One expecting A LOT. It had been described to me as a “genre-busting” novel containing “irresistible nostalgia;” some people even went so far as to repeat the review that describe reading it as a “nerdgasm.”

All of which means that when I started this book I kept thinking “If my calculations are correct, when this baby hits eighty-eight miles an hour, [I’m] going to see some serious shit.” (Doc Brown in Back to the Future.)

The story begins in the year is 2044. This future is just as ugly as many people had predicted. Global warming, food shortages, mineral depletion, et cetera putting to rest any dreams of a paradise on earth.

Thankfully, humanity can escape the ugly realities of their life by jacking into the OASIS, a massive virtual utopia where they can be anyone and be anywhere in a digital galaxy of thousands upon thousands of worlds. Of course, the more real money they have to invest in their OASIS avatars the more perks they receive, but there is so much free content that even the poor, downtrodden of the world can’t complain too much.

Wade Watts is one of these unprivileged users. He lives in a block of stacked mobile homes with his aunt; a bitter woman who totally hates him and only puts up with him sleeping in her laundry room due to the government credits he brings into the family. Every day, Wade escapes this pathetic existence by sneaking into an abandoned van that he has

turned into his hideout. Once inside he dons his virtual-reality visor and hooks into OASIS, becoming his online persona: Parzival, because “Life moves pretty fast [in a virtual reality world]. You don’t stop and look around once in a while, you could miss it.” (Ferris Bueller in Ferris Bueller’s Day Off.)

Now, part of Wade’s online time is spent attending virtual high school, but he spends a lot of that classroom time and all his “free” time doing what he loves: being a “gunter” and trying to decipher “Anorak’s Invitation.”

What is a gunter and Anorak’s Invitation, you ask?

You see, a child of the 1980s named James Halliday is the genius video-game designer who created OASIS, a massively multi-player online game which evolved into the global virtual-reality network which entertains humanity every day. Naturally, this guy was a billionaire and primary owner of the company that runs OASIS, but he also was 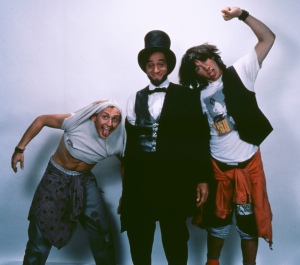 an obsessive fan of anything from the ‘80s and a bit of an eccentric recluse. So when he dies, Halliday leaves behind a mischievous legacy dubbed “Anorak’s Invitation.” In this invitation, Halliday’s virtual avatar challenges users to solve a series of ‘80s riddles, clues, and puzzles to win both his fortune and a controlling interest in his company as well as to “Be excellent to each other, and party on dudes!” (Abraham Lincoln in Bill & Ted’s Excellent Adventure.)

The world goes wild at the announcement! Millions of people trying to discover and solve Halliday’s video game Easter egg. Because that is what everyone assumes it must be, since, in “Anorak’s Invitation,” Halliday had spoken of his love for Warren Robinett’s Easter egg in the Atari game Adventure. (An Easter egg is a secret sign, clue, or level embedded into a game

that remains hidden unless discovered by users.) Soon, egg hunters, or “gunters”, are declaring “They’re hee-eere!” (Carole Anne Freeling in Poltergeist) as ‘80s trivia (tv, movies, music, arcade games, console games, and everything else) makes a comeback fifty plus years after its demise and takes over the world in its role as educational fodder for gunters everywhere.

But, as Ready Player One begins, no one has been able to solve Anorak’s Invitation. In fact, no one has even discovered the first key out of the three Halliday mentioned in his challenge. The casual egg hunters have long since given up, leaving behind only the hardcore gunters like Wade Watts. People who “. . . don’t want to sell anything, buy anything, or process anything as a career. . . . don’t want to sell

Wade himself has become immersed in the ‘80s. His favorite television show is re-runs of “Family Ties.” Atari games are must play games for him. Hell, even his interaction with online friends seems to rotate around him disparaging them about their lack of ‘80s knowledge, their taste in ‘80s movies, and doing

so with creative use of ’80s-vintage movie quips like “Don’t call me Shirley.” (Airplane!) It really seems that everything in Wade’s life is the Big ‘80s all over again. (Guess the Terminator was right when he said “I’ll be back.”) And that my reading friend is why I found myself not enjoying this book.

Speaking honestly, Ready Player One was a mind numbing trip down memory lane for me. As a pre-teen in 1980 and an early twenty-something when the ‘80s ended, everything Ernest Cline talks about I experienced first hand back-in-the-day. My first video game console was an Atari 2600. My first computer was a Tandy TRS-80 color computer. My favorite video game for my TSR was Dungeons of Daggorath. 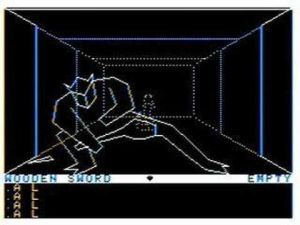 The reason I got the computer in the first place was because I saw the movie WarGames and wanted to be a computer programmer. Dungeon & Dragons was my life in middle school. Star Wars became an addiction. The television episodes, the movies, the music, Rubic’s Cube, and everything else were all part of growing up for me, so none of those tidbits of trivia were new or exciting, which meant I really needed a good story to keep this one interesting.

Alas, the story contained here remained a very straight-forward quest to learn ‘80s trivia, then use it to find a key where more ‘80s trivia was needed to complete a quest before

needing more ‘80s trivia to unlock a gate which then required additional ‘80s trivia to complete a task. It became about as repetitive as Mr. Miyagi’s “Wax on, wax off!” in Karate Kid. Meanwhile, the fairly interesting dystopia real world made briefer and briefer appearances as Wade got richer until anything outside of the game almost ceased to exist. I suppose, Wade really took Alex Keaton’s philosophy to heart and decided “People who have money don’t need people.”

And the ending to Ready Player One? Well, it honestly read more like the conclusion of a video game than a novel to me, which was fitting in a way, I suppose, but not very fulfilling.

B-B-But everyone else seems to love this novel, why are you talking bad about it like this?

Actually, I don’t like criticizing this book. I wanted to like it, but I just didn’t. Even at my

age, I still enjoy being part of the “cool group,” which seems to mean the people who think Ready Player One is “Awesome! Totally awesome! All right, [Cline]!” (Jeff Spicola in Fast Times at Ridgemont High.) And I suppose for what it is (A homage to ‘80s culture), this novel is an okay read. I’m sure the novelty of revisiting your childhood or learning about ‘80s pop culture is amazingly entertaining for some. I, however, lived it, loved it, and moved on from it. Not that I mind reminiscing about the ‘80s every now and then, but a little goes a long way,

and Ready Player One was too much of a good thing. So, for better or worse, “Sometimes you just gotta say, ‘What the f*ck.” (Joel Goodson in Risky Business) and tell the truth, and the truth is I must need some “nerdagra,” because I didn’t have a “nerdgasm” when reading this one.

Don’t take my word for it though, buy the book at Amazon.

8 Responses to READY PLAYER ONE by ERNEST CLINE